The eighth National UAE Barista Championship is calling skilled and professional baristas to showcase their expertise on 2 – 4 November in Dubai. 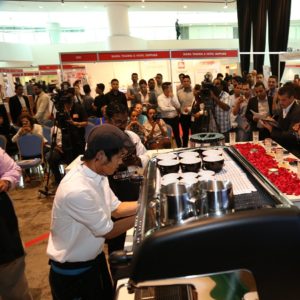 Participating baristas will be judged on a 15-minute performance, during which they will be tasked with preparing four batches of identically prepared espressos, espresso-based milk beverages, and their very own creation of espresso-based signature beverages.

The winner of the UAE’s Top Barista title will go on to represent UAE at the 2017 World Barista Championship in Seoul, South Korea.

The fifth National UAE Latte Art Championship will allow baristas to highlight their on-demand creativity. Beverages prepared by competitors will be judged for visual attributes, identical patterns in the pairs, contrast in patterns, and the barista’s overall performance.

The UAE Cup Tasters Championship will test the speed, skill and accuracy of professional cuppers in distinguishing the taste of specialty coffees.

“We have witnessed a notable increase in participants at the National Coffee competitions over the years with the Barista Championship being the most popular. Going by the current trend, we are upbeat that all the championships will receive wide participation from innovative, creative and talented baristas from the UAE.”

Sanctioned by Word Coffee Events (WCE) and affiliated with the World Coffee Championships, the UAE Coffee Championships will be part of the International Coffee and Tea Festival which will take place on 2 – 4 November 2016 at the Meydan Gallery & Convention Centre in Dubai.