More than 100 resident chefs prepared a gigantic cake for visiting celeb chefs who will serve event goers a ‘slice of Yas’ at Taste of Abu Dhabi this weekend.

Celebrity chefs from around the world were treated to an appetizer of Yas as they climbed aboard the world’s fastest roller coaster. Joined by a number of in-resident chefs, the men in white admired the craftsmanship of the world’s largest Yas cake crafted by the Ferrari World Abu Dhabi’s resident pastry chefs. 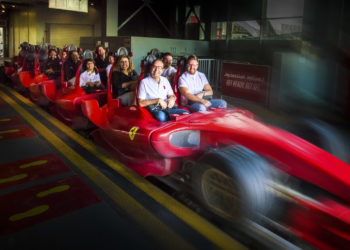 “Yas Island is well regarded for its leisure and entertainment. A lot of people don’t know that Yas is also a dream destination for foodies. We have more than 100 cafes and restaurants offering cuisines from around the world, all within five minutes reach of each other. The perfect solution for our time-poor lives,” said Clive Dwyer, executive director Destination Management for Yas Island.

Alongside international celebrity chefs, Taste of Abu Dhabi boasts a mouth-watering line-up of 25 restaurants, the popular Quooker and Lurpak Cookery School and OSN-Food Network Chef’s Theatre, as well as an unmissable performance from legendary reggae band The Wailers. The Landrover and ADCB stage will be filled with live music throughout the three-day festival, starring The Maple Jacks, UK based leading lights productions and 4The Music. 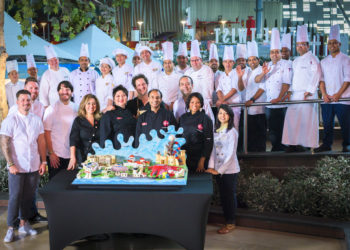