With another Lock, Stock & Barrel in the pipeline, five franchise deals looming and a coveted US brand under its belt, Solutions Leisure Group is taking no prisoners in 2017 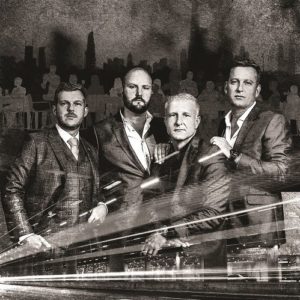 By the end of 2017, Solutions Leisure Group, the three-year-old Dubai-based entertainment company, will have nine operating venues, and looks forward to doubling its turnover and staff numbers with an additional 45,000ft2 of floor space in Dubai.

The company’s portfolio comprises homegrown brands, Q43, Asia Asia and Lock Stock & Barrel, in addition to franchises of Karma Kafé and Melbourne-based seafood concept, The Atlantic, which opened in Souk Al Bahar last month. Next year, the focus will be on ramping up the portfolio “hard and fast”, says Solutions Leisure managing director Paul Evans, who confirms plans for the company’s most successful brand, Lock, Stock & Barrel, to open in May 2017 at the upcoming Rixos The Walk, located on Dubai’s JBR Walk.

“The second you stop being busy, people will catch you and you’ll become irrelevant… We’ve seen it in different venues we’ve had over 20 years. You have to put more dedication into a three-year-old venue than a one-year-old venue”

One differentiating feature of the new venue will be an adjoining casual, food-focused concept, with an “urban street carnival feel”. Evans explains: “It will be Lock, Stock & Barrel the sequel with another very large food component bolted in. This will be a very interesting not-seen-in-Dubai food component with alcohol, multiple cuisines and live music. It will allow people to pop in, have a bite to eat, drink a cold beverage, and be home for 10.30pm – it will be slightly more casual, not a full-on party.”

In addition to the company’s plans to expand organically in Dubai, Evans has his sights set on conquering the international market and has already received requests for Lock, Stock & Barrel franchise deals in Las Vegas, New York, Melbourne, London and Hong Kong. However, even for Evans this could prove too ambitious. “It’s early days and we need to find the right people. From a capacity point of view, it could be challenging to do five licenses in one year, but if we have great partners, why not?”

A more realistic plan according to Evans, is taking the Asia Asia and The Atlantic brands into Saudi Arabia in 2017 with the same partner, in addition to expanding Lock, Stock & Barrel abroad. “It’s our intention to get anywhere between three and five international licenses across The Atlantic, Asia Asia and LSB brands opened in territories around the world next year.”

Keeping a tight rein on partners, particularly when it comes to the Lock, Stock & Barrel brand, is another concern for the team. “We adore that brand,” Evans comments. “We’re not going to be a licensing company that gives you a manual and you see us once a year to collect the cheque. We’ll design it for you, we’ll recruit the team, we’ll get the band for you, we’ll drop in the GM, the assistant manager, the bar manager and the DJ and then when we think you’re ready to take over we’ll take a step back. We’ll be in the licensee’s venue every single day for the first six months.”

And while expanding the company’s homegrown brands is hugely important to Evans, he is also very proud to unveil Solutions Leisure’s signing of the famous STK restaurant brand in association with The ONE Group – a deal the company has been pursuing for three years. STK offers a modern twist on the American steakhouse concept with locations in major cities throughout the US and Europe.

Solutions Leisure has plans to roll out two STK venues in Dubai in 2017. STK Dubai will be located at The Address Downtown Dubai hotel on Emaar Boulevard with 240 seats, including 100 on the outdoor terrace overlooking Burj Khalifa, while the second venue, the 160-seat STK Beach, will be located next door to the new Lock, Stock & Barrel at Rixos The Walk.

“It’s our intention to get anywhere between three and five international licenses across The Atlantic, Asia Asia and LSB brands opened in territories around the world”

“They are super-hot; everyone in the land wants to sign with them and so we’re over the moon. It takes us to another level from what we’re doing with our homegrown brands. We’re now able to execute internationally-renowned brands,” comments Evans. “We are excited to have been the group chosen to roll out this top end brand. It shows the amazing growth of Solutions Leisure in only three years in Dubai, the hard work and grit from all our team over the last three years is really paying off. It’s the perfect marriage of brand and operating partner.”

While plans are already confirmed for an Abu Dhabi STK, the team will assess the response to the region’s first openings before moving forward with more openings. Evans comments: “We’ll see how it executes; it’s all very well how it goes in Vegas, but we need to know how it will go in Dubai and if we can operate it at the same level. Does the market receive it as well as it receives our other concepts?”

The Atlantic opened in January at Souk Al Bahar

The resources required to accomplish Solutions Leisure’s ambitious expansion plans will see the company almost double staff numbers from 450 to 800 by the end of next year, with a restructure already underway in preparation. “You can’t just grab anyone you want,” explains Evans. “You’ve got to build the team to operate that level of turnover and we’re already busy with it. We’ve doubled our sales and social media team and operationally we’re splitting the group into a bar and a restaurant division and promoting internally,” says Evans. Two general managers of Lock, Stock & Barrel will become area managers for the bars division, while the general manager of Asia Asia will take the helm of the restaurant division and two assistant managers are being promoted to general manager roles. Recruitment is also underway for extra chefs and back-of-house roles.

“They are super-hot; everyone in the land wants to sign with them and so we’re over the moon. It takes us to another level from what we’re doing with our homegrown brands. We’re now able to execute internationally-renowned brands”

While expansion is a key item on the 2017 agenda for Solutions Leisure, Evans – who has been working in the F&B industry for 15 years and has owned and operated more than 25 F&B outlets – understands the importance of maintaining standards in his existing venues. “The second you stop being busy, people will catch you and you’ll become irrelevant,” he says. “We’ve seen it in different venues we’ve had over 20 years. You have to put more dedication into a three-year-old venue than a one-year-old venue.”

Evans’ ambition is simple:  for Solutions Leisure to be recognised as the number one operating F&B company in the Middle East, which he says is “nothing to do with money”, but rather how many people want to come to the venues.

“We didn’t come here to make money; we came here to make great venues so that people would say, ‘you guys are different’.  If you do that, guess what? You’ll end up with money. Not one of our venues is ever designed with a PNL, which drives our investors crazy. Instead we say, ‘this is how it will look and feel and we reckon 20,000 – 50,000 people per month will enjoy the experience and they’ll all spend AED 100 – 400 per month’.

A Wave Of Success

Wavehouse Set To Open At Atlantis The Palm

Among the foodservice and HORECA industries’ strategic partners, in this exclusive interview, Chef [...]