The Black Lion is Dubai’s first American gastropub, and the transatlantic cousin of the award-winning Reform Social & Grill in The Lakes, both owned by Gates Hospitality. Catering News ME went along for a slice of Dubai’s very own Big Apple.

With a simple retro diner theme, the Black Lion, which opened in the H Hotel, Sheikh Zayed Road on 18th July, combines refined American classic dishes with a beverage list inspired by the best of the US drinking scene.

Inspired by iconic bars and speakeasies in New York, the venue serves everything from late breakfast to quiet mid-morning coffees, right through to a swift business lunch buffet in the week, and a late night ‘Lock In’ menu from midnight to 3am to curb those midnight munchies.

Designers TGP Design from the UK have created a comfortable ‘local’ feel, with a space that has a unique style and vibe. 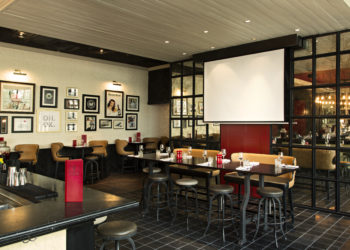 Jonathan Mangham, design director of TGP Design, says: “The H Dubai is a boutique destination and works to compliment the venue as both are very personable.

“Dubai is still lacking mid-price independent restaurants and concepts and so this challenges the international brands. We don’t have as many regulations or brand guidelines to adhere to as we’re creating them ourselves and so we have more of an opportunity to develop and give our consumers what it is they’re looking for, while still providing something interesting.”

Jonathan’s brief was to make The Black Lion “the perfect neighbourhood hang-out”, by transforming the existing space, lightening it up during the day, but creating a cosy, inviting atmosphere in the evening.

Working closely and repeatedly with owner operators over the years, Jonathan has developed a very operationally aware approach to bar and restaurant design rather than an ego driven designer led approach. He has a first class degree in architecture and a masters in architecture and interior design from the Royal College of Art, and he established his own practice in 2002 with the commission to design London’s award winning Milk & Honey private members bar.

He has designed all of Match Bar/Rushmore Group’s venues worldwide including Match Bar & Grill in Melbourne, Australia, The Clubhouse, Chamonix, and The East Room, Red Hook, and Giant Robot in London. He has also designed multiple venues inside London’s O2 Arena for Inc Group, and their flagship venue, Madison, at One New Change in the heart of The City. Other clients include Mahiki and Whisky Mist, Compass Group with work on Roux at Parliament Square and Vertigo at Tower 42, and Hed Kandi for Ministry of Sound.

Jonathan says: “The inspiration for the interior design of The Black Lion comes from the contemporary gastro pubs and restaurants of the UK and New York. Specifically places which bring life back to former industrial spaces.

“The project is a refurbishment of the previous fit-out so the space itself wasn’t challenging as we retained the basic layout, but the brief was to create a lighter more welcoming space than the dark oppressive place it was previously with as quick a turnaround as possible. That was the challenge as a total rip out and new build wasn’t feasible, so we had to work with as much of the existing fabric as possible, adding, subtracting and refinishing materials as required in a way more common to working in London than Dubai where starting from scratch each time is the norm.”

When guests arrive in this casual diner, they are welcomed into the reception area and then escorted through to the restaurant space, immediately welcomed by the bar. The space set up allows them to dine close to the bar area, which is more lively and interactive, whilst the tables positioned towards to the back of the restaurant allows for more of an intimate dinner.

Jonathan adds: “We retained the basic layout of the main from before, but we opened up what was previously a corridor like sandwich takeaway to the main room giving the site a new entrance directly from the office tower entrance lobby as well as from the hotel, which also had the benefit of adding more seats in a slightly less exposed area than the main bar.

“Much of the furniture was refurbished and reupholstered by our contractor. There was nothing inherently wrong with the furniture itself, but the fabrics and colours weren’t right for the new design. Also given the timeframe and budget of the whole project, procuring all new furniture wasn’t an option. Similarly we had to source new lighting from retailers in Dubai rather than importing as we might normally do, but we did have time to import the traditional Anaglypta Lincrusta wall covering which has a major part in there transformation along with the painted brick wall which is home to the American inspired art collection.”

Prior to the conversion, the outlet was called Bapas and ran as a ‘Belgian tapas’ bar. Jonathan adds: “I’m proud of the transformation of the site as a whole, rather than the design of any specific part of it. It’s actually a very simple refurb that has added up to more than the sum of it’s parts thanks to a strong F&B concept to inform and inspire the design, something we are very committed to at TGP.”

The TGP team had about eight weeks to design and execute the concept, which they say was challenging. The design team selected statement pieces and styles from local retailers within the region, and also worked with local company Drawdeck to source all of the prints to create a feature wall.

“The kitchen refit was very minimal as we took an existing operational site and apart from a couple of new small pieces of kit, such as a chargrill and salamander, we didn’t make any changes‎ to what was already there,” says Janathan.

CCE provided the kitchen appliances, which included units from both Falcon and Williams.

Naim Maadad, chief executive officer of Gates Hospitality, the owner and operator of the Black Lion, says: “We’ve had a great response so far and it’s been a welcome addition to Dubai, especially from those living in the surrounding Downtown area as it’s very different to what is currently existing on their doorstep.

“We’ve taken the design inspiration from The Black Lion’s transatlantic cousin, Reform Social & Grill which is located in The Lakes. We’ve replicated the exposed brick wall, printed wallpaper and nostalgic prints however the two still remain very different. If there’s demand for another The Black Lion or Reform Social & Grill then I’m sure it’s something we would consider, although there’s no plans for a mass roll-out.”

Within the last year TGP Design have been responsible for the design of China Grill at The Westin Mina Seyahi, La Residence at Raffles/Wafi, Crab Tavern and Spirito which occupy the whole 9th floor at the Media One hotel, and the soon to open Sportsman’s Arms at Zayed Sports City in Abu Dhabi. They are also currently working on two restaurant projects in Jeddah, as well as our London based projects.