Eric Lanlard, master pâtissier and twice winner of the prestigious Continental Pâtissier of the Year at the British Baking Awards, has earned himself an international reputation for superlative baked creations for an impressive A-list clientele. 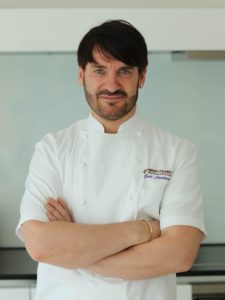 Having trained in France, Eric first learnt to cook in the navy, before moving to London aged 22 to become head pastry chef for Albert and Michel Roux. He stayed there for five years before launching his own business, Cake Boy, a destination café, cake emporium and cookery school based in London.

Today, Eric is an experienced author and TV presenter, and he has baked for the weddings of pop music and movie stars, super models and even royalty, so when it was announced Eric would bring his celebrated afternoon tea skills to whole new heights in Abu Dhabi last month, Catering News ME editor, Michael Gordon, was first in line.

Tea for Two
For one afternoon only, on 9 November, Eric Lanlard presented a bespoke ‘Soir D’Orient’ Afternoon Tea at Le Royal Meridien’s Stratos – the UAE capital’s only revolving lounge bar and grill.
Working closely with the 5-star hotel’s own award-winning executive chef and food and beverage director Justin Galea, the inspirational culinary artiste designed a stand-out menu that owed much to the heritage of the UAE and the region.

“I love Middle Eastern flavours and sweets and with this exclusive afternoon tea we took guests on a magical food journey,” said Eric. “To establish the right atmosphere, and before guests settled into the gastronomic experience, we asked them to close their eyes, take a deep breath and enjoy the subtle fragrance of a specially-created cardamom edible perfume which transported them right into the middle of the Al Ain Spice Souk.”

The menu was a savoury and sweet tribute to Arabia with flavours of saffron, rose water, dates, cardamom, cumin, pistachios, bee pollen and caraway seeds.

What attracted you to work at the Stratos in Le Royal Meridien Abu Dhabi?
I have a deep respect for Justin Galea, the food and beverage director at Le Royal Meridien Abu Dhabi – I relate to his philosophy and passion. We got on really well when we first met last year. We share a similar vision and I’m so pleased to be able to work with their brilliant food team and pastry chefs. I’ve always loved working with Middle Eastern flavours and I’m a big fan of afternoon tea. It’s huge in London – it’s the new ‘lunch’ so hopefully we are starting a new trend…

Let’s start from the beginning, how did your time in the Navy help your career as a chef?
I was the pastry chef aboard the Jeanne D’Arc [Joan of Arc] – the French Navy flagship. It was where I chose to do my national service and it was great experience. I got to see the world and cook for diplomats. The experience was incredible – I had a tiny kitchen and sometimes that was a challenge – you have to use what you have got when you are on board – you have to improvise. I remember the president’s wife asking me to make Easter Eggs – the weather was super-hot and I had to literally stand in the freezer to make the eggs.

Life with the Roux’s must have been very different to the Navy – how did you adjust?
I joined the Roux Brothers as pastry chef in their production kitchen in London aged 22. Within months I was promoted to head pastry chef. Again it was a great time for me. I had come to London to improve my English and, there I was, working with two of the most iconic chefs in the world – and they were generous and supportive to me.

How did you secure a job with Michel Roux Snr?
The Roux Brothers were the only chefs that I knew at the time – they were so well respected and they were in London. I wrote to them and secured a job.

How important was Michel in your career training and development?
I was a fully trained patissier when I came to London. They are legends in the kitchen and outside of the kitchen so just having walked through their doors and worked with them for five years speaks volumes. Like I said they are the most generous people and treated me so very well. We are like family and I am still in touch with them today.

What drove you to leave Michel and set up Laboratoire 2000?
It was the right time for me to branch out on my own and start my own business – it was something that I had always wanted to do. The London food scene was in its infancy and we were able to establish ourselves very quickly. Within months we became the official patisserie and bakery supplier to Fortnum & Mason.

What was the concept behind Laboratoire 2000 and how did it fit with the times?
We were a wholesalers and ran a production kitchen and produced exquisite desserts and patisserie for some of London’s high-end retailers and patisseries.

Why did you switch to Cake Boy, and how did it differ?
Wholesale was becoming increasingly difficult – the margins were ridiculous and I didn’t want to compromise on ingredients. It’s hard to produce quality on a shoestring. Everything is about timing – we were looking for a new kitchen and found a ‘blank’ canvass. It was set within a beautifully designed residential development – a perfect space in which to open Cake Boy.

Why did you feel compelled to teach from Cake Boy?
Teaching was always part of the plan – it’s one of the things that I enjoy doing the most – being able to share my experience and my knowledge with baking fans is very satisfying.

What got you into television?
It sort of just happened – as my reputation grew for creating fabulous desserts and cakes – I started getting some press and lots of word of mouth and I became a regular on a food focused live show. It was a daily show and I was part of the regular chef roster along with Paul Hollywood. This was around 14 years ago – way before the Baking Zeitgest happened. Paul Hollywood and I were so grateful to be part of the show because at the time nobody – magazines, publishers or TV – were interested in cake and bakes.

Are you comfortable as a celebrity chef – is it something you worked towards or stumbled into?
My ambition was to make glamorous cakes and to own my own patisserie. It was never to be celebrity chef. I’m comfortable with being well known as someone who is a master of their craft. Celebrity comes and goes…

You have made cakes for some huge celebrities and royalty?
I have and of course I’m proud but as far as I’m concerned all of my customers are just as important. We treat every bespoke order the same – it’s important for me that every customer leaves our premises feeling special. Our service and our cakes is what makes our reputation.

Which cake was the most challenging to make and which are you most proud of?
There are too many to list but I was very proud to have been commissioned to make Her Majesty the Queen Mother’s 101st birthday cake.

How did Cox Cookies and Cake come about?
It was a collaboration between myself and Patrick Cox – the shoe designer. He had always been obsessed with cakes and baking as a child and was looking for someone to partner with. Over the course of a one year partnership we opened a ‘pop-up’ cupcake concept in Soho and we had a lot of fun and sold a lot of cakes. We also produced a stunning book.

Where you surprised by the huge success of the Great British Bake Off?
Not really – baking is a great family activity. The show brings in all of the key elements that make for great television, such as compelling characters, amazing bakes, a bit of jeopardy thrown in and some very good presenters. It is real feel good factor TV – something that everyone can relate to.

How do you find the culinary scene here in the UAE?
It is very impressive. There is lots of choice, great chefs and restaurants and everyone is food obsessed here. It’s wonderful to see and be part of the scene.

Are you considering a permanent position here in the UAE?
We would love to have a Cake Boy concept with a baking school in the UAE – so watch this space.