Food Festival teams up with SIAL

Abu Dhabi Tourism & Culture Authority (TCA Abu Dhabi) and Abu Dhabi Food Control Authority (ADFCA) announced today that the annual Abu Dhabi Food Festival and SIAL Abu Dhabi are set to team up in 2016, bringing together all the ingredients for a food extravaganza across the emirate in December 2016.

The festival will incorporate the already established and popular Street Feast, Emirati Kitchen and Gourmet Abu Dhabi strands as well as SIAL.

Spread over three weeks, the festival that attracted more than 50,000 visitors in 2015 will appeal to residents and visitors alike and will be supported by a full range of promotions in the emirate’s hotels, restaurants and malls. 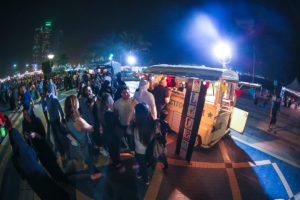 “Over the past seven years we have seen a terrific transformation in the quality of cuisine and the levels of service within the emirate’s food and beverage scene, which the Abu Dhabi Food Festival is proud to have been a part of,” explained Sultan Al Dhaheri, Acting Executive Director Tourism, TCA Abu Dhabi. “Now, adding a business focus ingredient to our already successful recipe, we believe the 2016 edition of the festival will be the biggest and best yet.

“We are very happy to be cooperating with the Abu Dhabi Food Control Authority on this event, and we firmly believe teaming up with ADFCA in this way will add value to the total culinary experience on offer to visitors, and we’re looking forward to achieving a successful festival together.”

SIAL has gone from strength to strength in the Middle East since its inception, with the 2015 edition having over 25,000 sqm of space for exhibitors, an increase of 20% on the year before. There will be 30 dedicated national country pavilions including USA, Italy, Turkey, India and Morocco. The event will also feature a number of new initiatives this year including SIAL World Summit, Global Chefs Challenge Semi-Final, SIAL Innovation World Champions, Regional Barista Championship and The Mercurys Awards.

Gourmet Abu Dhabi was launched in 2009 with the dual aim of raising food and beverage standards within the emirate whilst also promoting the traditions of Emirati hospitality while the Emirati Kitchen event will once again celebrate the authentic dishes of the UAE.

The region’s second ever Street Feast will be a fantastic culinary experience for everyone with food from a range of countries and of different types to be served up by a kitchen caravan of food trucks that is affordable and accessible to all.