From Clinton Street to Downtown

When Neil Kleinberg and DeDe Lahman, chef-husband and wife, opened their first Clinton Street Baking Company store in April 2001, their only mission was to make the best baked goods in New York City.

With loyal customers returning daily to sample Neil’s bread, hand-mixed in small batches, and his simple yet delicious omelettes, sandwiches and soups, murmurs began to build and grow louder throughout the local community. And their awe turned to shock when New York magazine voted Neil’s blueberry pancakes best in the city – not once, but twice! 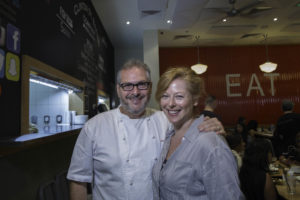 In line with that demand, the company has now expanded to Tokyo, Singapore and most recently the UAE. Last month the family bakers invited Catering News ME to an exclusive dinner in their latest store in Burj Views, Downtown Dubai, and DeDe gave us an insight into their recipe for success.

Are you both foodies and when did your passions begin?
Neither of us use the term “foodies”- it’s not a category we identify with – but Neil was always cooking from an early age, and I was fascinated by the restaurant life. Neil was forced into a life of food at home because he felt he had to rescue his family from his mother’s cooking. I on the other hand, was taken out to many fancy restaurants by both my grandmothers who were independent sophisticated women with great taste.

How did you meet and how was the partnership formed?
Neil and I met randomly as patrons at a restaurant in Greenwich Village. Ten months later we were married, and four months after that we had a restaurant.

Why Clinton Street – what is the story behind the name?
Clinton Street Baking Company is named after the street on which it sits. We wanted a name that was easily identifiable. Neither of us is into cute or catchy and at the time we were literally planning to run and operate a small wholesale baking company with a cafe retail front.

When and where did the brand begin?
What really happened once we opened the cafe is that neighbourhood locals kept streaming in looking for things. First it was soups, sandwiches and burgers, then it was brunch and then it was dinner. So we took what Neil did best, which is savoury classics, and applied them to what the neighbourhood seemed to crave. This was a very organic way to build the business. The brand started to take off after year five when people started to seek us out for our pancakes, French toast, egg dishes and fried chicken. First we became one of New York’s best, then the attention got national and then one day we were international, which was a total honour and really blew our mind. We owe a lot to chef Wylie Dufresnes who put Clinton Street on the map.

How difficult was it to get Clinton Street established?
Neil was a seasoned restaurant professional and chef with over two decades cooking in New York when we started so that wasn’t very difficult. It did, however, take us about six years before people understood that we were much more than a bakery.

What has been central to the success of the brand?
We know exactly what we do best and we know what our customers love most and we work hard to consistently marry the two. We also use the highest quality ingredients we can find, made with love… and butter!

What is the ethos of the company?
We always function under the aegis of being a family neighbourhood restaurant with a cosy vibe, unpretentious service and the most elevated version of any American classic you can find. We pride ourselves on being the kind of food that’s unfussy and not fancy- just totally delicious and satisfying with every bite.

Why did you chose to bring this brand to Dubai and at that time what experience did you have of the local market?
Our partner, Hisham Samawi, convinced us that Clinton St. Baking Co. would be embraced in Dubai, where he lived. He was totally and utterly devoted to our food and our style and he really understands our identity. Even better he wanted to create a partnership where he would operate the restaurant with his brother. A family partnership on the other side of the world with our food was intriguing and exciting to us. And now we love Dubai, especially the food scene. I am blown away by the Lebanese, Syrian and Indian food I have eaten in Dubai.

What were the key challenges in setting up your business in the UAE?
Construction is hard in any city, Dubai included. It has also been a challenge to get people to understand our lane, which is casual luxe. Our food is casual and comfortable but it is not cheap. We use chef techniques and quality that match 5-star restaurants, but we do it in a very casual setting. This is confusing to some abroad, but in NYC, this casual luxe chef approach is common and understood.

How do you source ingredients in this region – are you able to remain local, sustainable and seasonal?
We are sourcing all organic ingredients wherever it is possible. Obviously being in Dubai most of that has to come from abroad but we do source the best ingredients we can. We are getting our organic chicken and eggs from France and our butter comes from France, also.

Our fruit comes from different regions of the world at different times depending on seasonality. We have deliveries coming all the time as we don’t prep and freeze anything; we prep everything fresh to be served to customers and the only thing frozen is the ice cream

What are your plans for expansion and growth within the region?
We are still working that out. We pledge not to move too fast so that we do not compromise quality and focus.