According to a 2014 report by Frost and Sullivan, organic farming in the GCC is set to reach US$1.5 billion by 2018 due to changing consumer tastes and habits.

The number of organic farms in the UAE rose to 39 covering a total of 3,920 hectares, marking an increase of 1,698% since 2007 when just 218 hectares accounted for organic farming.

Ali Yousef Al Saad, chairman of the organising committee for SIAL 2015 and acting director of communications and community service division at Abu Dhabi Food Control Authority (ADFCA), said: “Food security throughout the region remains one of the most dominant topics of discussion as regional demand for food imports rises due to an expanding population, a booming tourism industry, increasing per capita income and limited water resources.

“This year’s new look SIAL Middle East is focusing on innovation and global food trends, so far I have been very impressed and encouraged by the developments on show allowing us to meet the increased demands on our food resources. The developments being made in the organic food industry are just one example of the innovative work being done in the region benefitting the economy and business.” 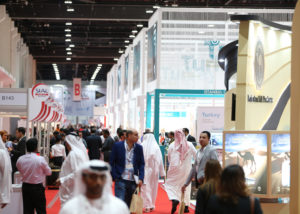 Speaking during day one of the exhibition during a session focusing on ‘The future of sustainable food consumption and organic trends’ Monique Marez, associate director, International Trade, Organic Trade Association (OTA) highlighted the growing demand for organic products in the GCC.

She said: “The UAE is quickly becoming a key market for organic products. Organic exports from the United States to Abu Dhabi have increased by 346% from 2011 to 2014 and sales for first half 2015 have already surpassed total for 2014.

“More and more customers are becoming aware of the benefits of organic and are making choices to incorporate organic products when possible. This of course is limited by available supply, however the organic customer is a loyal customer and does not often go back to conventional once the switch has been made.

According to US Trade Bureau Data, regional organic imports from the USA have risen from US$4 million in 2011 to nearly US$25 million in 2014. The UAE, Saudi, Qatar, Kuwait and Bahrain are the biggest importers.