Giving in to the craving

Intent on substance before style, executive chef Shashwat Shivam, is putting taste at the top of the menu at Jodhpur Royal Dining to keep guests coming back for more. Patrick Ryan hears how Indian street food and home cooking are getting the fine dining treatment. 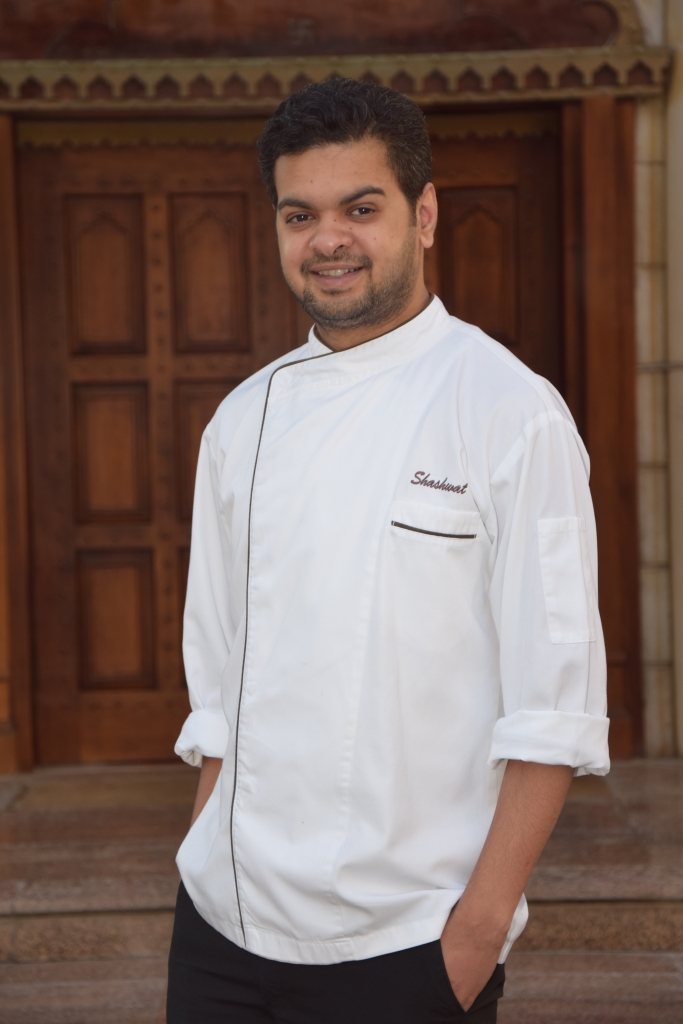 Interpretations of Indian food have expanded the cuisine in unimaginable ways.

In Britain, recipe books dating back to the 1700s feature curries and pilau, tasted, remembered and muted, by those who had travelled to exotic places. In the 1800s, the country’s first Indian-owned restaurant opened, but while authenticity was on the menu, innovation played a huge part. Over the next 200 years, an entirely new cuisine, the British Indian, emerged, featuring tikka masala, butter chicken and Rogan Josh and today, these new dishes (and many more) are served across the UK’s 9,000 curry houses.

Elsewhere, Indian food downsized as molecular cuisine swept the world. A trend so intense and widely interpreted that even pioneers such as Atul Kochhar eventually turned their backs on it.

Then fusion arrived. Indo-Chinese, Indian-Italian, Indian-style international. To paint a picture of how far things have gone, today New York is home to an Indian-Mexican fusion called Taco Mahal.

While this evolution has pushed the boundaries of flavour and texture combinations, for one chef, it is a double-edged sword.

Through the menu at Jodhpur Royal Dining, Chef Shashwat Shivam is stepping back from the distractions of presentation, tacos and bite-sized portions served with fanfare, to focus on authentic flavours that will keep guests craving more.

A nostalgic homage to bygone India, the menu at Jodhpur Royal Dining takes inspiration from across the country, with a focus on the “classics of bygone days”, home cooking and street food, and pairs these flavours with international dishes.

In a nutshell, it’s “retro innovative”, and it’s already an award winning concept.

Shivam explains: “The street food of India doesn’t rely on liquid nitrogen gimmicks and presentation. You can go to the same place every time for the same taste and I want my customers to return here time and time again for the taste, not the presentation. You should really crave food.”

For diners who want to experience something unique, Shivam has created a boneless beef short-rib. Braised for six hours, covered in tempura batter and deep-fried, then tossed in mango sweet chilli.

He says: “It isn’t only about textures. It combines sweet, sour, crunchy, crispy, the butter-like texture inside and the spiciness. All these things come into one dish.

The idea even extends to Butter Lobster, garnished with crispy shrimp and served with Konkani gravy, as Shivam continues: “We take inspiration from all over India, not only Jodhpur, with fusion concepts using modern technology or ingredients that we use. The concept for me is all about the taste the aroma.”

Shivam draws inspiration from his interest in international flavours and cultures, cultivated over a 15-year career in London, Paris, the US, India and Dubai.

Although he graduated from the Culinary Institute of America (CIA), he maintains that the real lessons are to be learned in the street-side cafes of his native India.

He says: “Home style cooking, street food and exposure to different restaurants have all influenced my style, and this menu. Mostly I eat at small restaurants not large, high-end places, because that’s where the real inspiration comes when you cook for taste. For presentation, there is plenty of inspiration today.”

There is also plenty of competition. Indian fine dining as a market segment received little attention until recently. In the last year, Dubai alone has welcomed multiple high-end Indian concepts, such as Khyber at Dukes Dubai and Masti at La Mer, headed by fellow CIA graduate Chef Hari Nayek.

While local demand is strong, India is the UAE’s largest international source market for tourists, driving demand every night of the year. In Abu Dhabi, Indian arrivals increased 21.7% in the first half of 2017 and in Dubai, India remained the top source market throughout the year, secured by an increase of 17% on 2016 arrivals.

To set Jodhpur Royal Dining apart Shivam has his work cut out, but he has a plan: always make your guests crave more. He says: “It is taste where the focus must be. If you enjoy the taste of a dish you will come again.”

In this Shivam has the potential to escape the pitfalls of Dubai’s fad-based food scene, bringing his own, timeless, touch to the trends of fusion and innovation. In part, his hand was forced. In the “four or five” years it took to perfect Jodhpur’s menu, Indian cuisine has seen so many new influences it’s impossible for one menu to honour every trend – especially when so many trends are off brand.

With his own predictions on where Indian food might go next, Shivam’s menu will remain unchanged for the foreseeable future, as he concentrates on bringing new flavours to old favourites.

He explains: “The menu has been four or five years in the making and over that time Indian cuisine has seen a lot of changes, for example the introduction of molecular cuisine. That is something, which for the full product, you have to create a gimmick for the experience – it isn’t about the taste. I think in a few years everything will come back to basics.”

When it comes to the wider culinary scene in his home emirate, Shivam believes restaurants are missing the opportunity to communicate directly with their guests, relying too much on third party websites to generate feedback.

In a few short years an entire sector has emerged, with regional reach, facilitating people’s experiences of the UAE’s thousands of restaurants, cafes, hotels, bars and lounges, and all providing a platform for those people to share their thoughts.

While Jodhpur Royal Dining scores perfect fives across all the major sites, Shivam encourages a more hands on approach. He explains: “That’s why the executive chef is here, that is why the manager is here and that is why our priority is customer satisfaction.”

Having joined Jodhpur Royal Dining in 2015, Shivam is now ready to expand with new branches across Dubai, capitalising on the pace of development ahead of 2020 and helping to build momentum behind the name.

For each new restaurant a whole new team will have to be created, with the same culture as the original team, trained by Shivam.

He says: “Team building is the greatest challenge because without it we cannot do anything. It isn’t just about me cooking it’s about the team cooking. It’s about building the service staff, building the kitchen, building the whole scenario and with Jodhpur Royal Dining, it was about the concept and training – both how we teach and how they learn.”

As he sets out creating a series of dream teams, Shivam will no doubt come across many of the region’s young chefs.

Reflecting on his own career, he advises them: “Be patient. Be self-motivated. I have been in the industry for 14 years and I don’t think I have achieved anything. The new generation want to turn into executive chefs overnight and it doesn’t happen like that. You have to have some patience and some practice, and you have to work at things and have discipline.”

Whatever the road ahead brings, Jodhpur Royal Dining knows exactly what it is and exactly where it wants to go and, with Shivam’s philosophical approach to F&B that could lead anywhere, as he says: “In this industry you go through setbacks and they help you decide what you want to do. You have to lend your ears to destiny and then destiny gives it to you.”