Attended by pastry and macaroon lovers, the event marked the book signing ceremony of two of his best-selling titles “Pierre Hermé Ispahan” and “Pierre Hermé ‘Macaron”, and provided audiences in Qatar with an amazing opportunity to interact with the avant-garde chef widely regarded as the top pastry chef in the world. 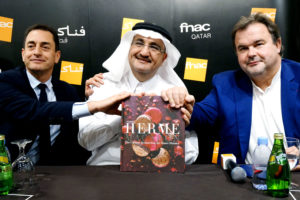 Now for the first time, all the macaron recipes from this revered French patissier are published in English in “Macaron”, which presents 63 recipes elegantly illustrated with stunning food photography. “Ispahan” reinterprets the Ispahan that incorporates three dreamy flavours of rose, litchi and raspberry in over 40 mouth-watering recipes for sweet treats including tarts, croissants, sorbets, macarons and fruit pastes and include special notes from celebrities and food connoisseurs on their fondness for this unique dessert.

FNAC is located on the ground level of the Lagoona Mall, in the West Bay area.