With the paint barely dry on the walls of its new warehouse complex in Dubai Investment Park, Catering News ME meets the family behind Fresh Express.

Founded by Costas Bouyoukas and his sons John and Girard in 1993, Fresh Express is recognised today as one of the leading distributors in the luxury food business within the Gulf Region. 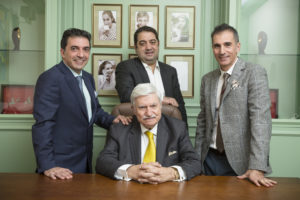 The origin of the business twenty years ago, was very different to what it is today. The company was born out of a humble family owned and run Mediterranean restaurant that specialised in seafood and game.

John Vouyoukas, vice president, said: “Being Greek, cooking with only the best ingredients was paramount. So, our family sourced the highest quality produce from around the Middle East. The popularity and success of serving the freshest of fresh, game and poultry dishes in the restaurant led us to expand and open the Grilled Mediterranean restaurant in Abu Dhabi in 1974.

“By 1988, the Emirate of Abu Dhabi was growing rapidly and so was the popularity of seafood. Seeing this as an opportunity and using his extensive knowledge of seafood and network of best suppliers, the company started to supply local seafood to the Emirate’s hospitality sector.”

The family was always committed to growth and expansion, and in 1991 sons Girard and John joined the business. By 1993 Fresh Express was formed, and in 1994 it started the importation and worldwide sourcing of produce, ingredients and beverages. Today Fresh Express is a prime supplier of food and beverage products to over 500 clients in 10 countries from the Middle East to South East Asia.

Maintaining its family owned heritage, today the company specialises in the distribution of brands and premium quality produce in the food and beverage industry. John says: “Being a family business means our profits are always injected back in to the business in the hope that the third generation of our family will grow it even further.”

With a presence in seven countries and a portfolio of more than 2,000 items coming from almost 60 destinations around the world, Fresh Express supplies luxury hotels, fine dining restaurants, multinational retailers, well-known airlines and royal palaces.

Today a team of 200 highly skilled and dedicated people are an extension of the Vouyoukas family, to which the company attributes its over 29 years of success. “Professionalism and passion paralleled by the values of respect, entrepreneurial spirit and excellence, are the trademarks of Fresh Express,” says John.

He adds: “Wild, farmed, organic, live, premium delicacy, gourmet niche, fresh or frozen, whatever defines a great culinary experience, you can be sure we will have it or that we can find it for you from anywhere in the world.

“But we don’t source from just anyone. Every supplier has to meet our rigorous quality demands, which ensures every order you place with Fresh Express guarantees continuous quality and a variety to keep our cooking imagination alight.”

Today the comes runs a modern fleet of 70 trucks around the UAE and boasts a turnover of AED250,000,000 or circa $68m. Having outgrown its 800sq.m warehouse in Al Quoz, Dubai, the company built a state-of-the-art 8000sq.m warehouse in Dubai Investment Park last year. With 25 chilled rooms the initial construction cost was budgeted at $7m but that eventually shot up to $13m. John says: “We never complained – providing it impressed our clients. We could go cheaper with this operation and make more profit but that’s not our style of business, we are all about quality. It is people, it’s us, our team; success doesn’t come from a product but people.

“We have customers come visit almost every day, it’s important to have chefs come and understand exactly who their supplier is and their hygiene standards, and when we had inspection from authorities it was beyond expectations. We are classified a-grade by Dubai Municipality,” adds John.

The facility was designed by Michael Chabowski (MCTS), a design firm based in both the UK and the UAE, and the kitchens were fitted out by locally-based Quality Kitchen. The complex warehouse is split into sections to prevent cross contamination. The receiving happens on one side, the packing on the other, and in between are the chillers.

The delivery and packing lorries pull up to the building and create a seal so there is no internal temperature fluctuation when the products are being loaded and unloaded. “Everything is sealed and the temperature is always controlled,” says John.

One of the chilled rooms hold up to 2.5 tonnes of the most expensive crustaceans in the world, while the vegetable chiller is filled with the freshest array of ripened asparagus, corn on the cob, avocado, and a wide selection of edible flowers and micro herbs. In fact the company imports more than 1,000 different varieties of vegetables.

The dairy section holds imported cheeses, eggs, yogurt, milk and butter, and the icy-cold seafood room is stacked with boxes filled with some of the finest fish from Scotland, Norway and even further afield, including a box of yellowfin tuna from the Maldives so large it takes two people to lift.

The warehouse has an on-site smoking, curing and filleting team, which goes through mountains of fish daily, as well as sausage and burger production and portion control.

All foodstuffs are imported to order, and the company works closely with chefs to source everything they need for their elaborate menus, often with no expense spared. John says: “There are many good seafood suppliers and fresh food suppliers but nobody has our selection under one roof.”

With more than 6,000 products from 58 international destinations often landing in Dubai in one night, Fresh Express is one of top clients of Emirates airlines. “We even ship food on passenger flights, as it can’t be delayed, so we can ensure shipment on time,” says John.

John adds: “If you can’t give the raw material as fresh as possible to the chef he can do nothing. When a chef is demanding he wants, for example, a blood orange from a small village in Spain, or he can’t create his dish, what else can we do.

“Nowadays we have direct flights between Dubai and the whole world, and recently Emirates opened a direct flight to Oslo which is now filled, almost every time, with our fish. Before we would fly to Amsterdam, London or Paris and then ship to Dubai, now we get it fresher to the chef.”

John and his brother Girard are very aware of the importance of sustainability in sourcing food stuff, and so they continually audit their suppliers. John says: “For instance, all of our fish comes with a sustainability code to trace it right back to the individual fisherman.”

The brothers also follow seasonality when and where they can, as John says: “You can find a tomato all year around but we know its best in summer, so we won’t bring out of season. If a product is truly needed by a chef then we will find where in the world it is in season – such as strawberries from Japan.”

Gerrard and John still do much of the sourcing themselves, as John explains: “We drive all over, internationally, just to meet farmers and suppliers – up to six times a year. We must do what is needed to find the best. The more artisanal producer the better.”

Today the majority of business for Fresh Express remains in HORECA, with 36% in retail including the distributor owned retail outlet in Dubai Marina called Market & Platters. Selling artisan produce to the general public, John is looking to expand this business with and additional store, at an undisclosed beachfront location, opening in 2017/2018.

The second store will be much larger than the first, incorporating a full restaurant offering, and carrying a beach theme throughout. John is also planning to convert a unit within DIP, currently used as a family garage, in to a fully-fledged photography studio, complete with a functioning kitchen and storage facilities for chefs.

The next big step for the company is to expand into Muscat, Oman, which will require a new warehouse in one years’ time, but initially be served from Dubai. As John says: “Either you stay at the top or leave the game.”