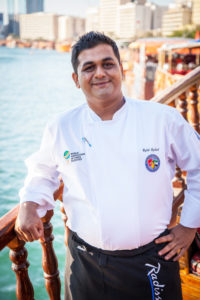 Led by Sagar Khadkikar from Madinat Jumeirah who has led the young team for the past three years, the team made up of Rahil Rathod from Radisson Blu Hotel, Dubai Deira Creek, Saravana Bhagavath Narayanan from J.W. Marquise, Madawanage Emmanuel Remold Gonsal Fernando from Madinat Jumeirah, and Jonathan Blatter from Atlantis the Palm competed along side 11 other teams from across Asia and also competed in individual hot kitchen classes.

They had to produce a three course meal from a semi mystery basket of ingredients in two hours. The team came up with a well balanced meal and were awarded with a bronze medal, despite having never competed together before.

The team trained for the past six months together every Saturday and then twice a week for the last six weeks before the competition at the J.W. Marquis under the watchful eye of Executive Chef Sebastian Nose and Executive Sous Chef Steven Peter.

The young chef Rahil Rathod also competed in hot kitchen individual classes, Live Cooking – Lamb category, for which he won a gold medal. It was another great achievement but more importantly a great learning experience for the young chefs. Additionally the National Young Chef Team won Bronze, team was led by Rahil Rathod.

The aim of the young chef national team is to continue working together over the coming 12 months and competing in Singapore in April, and then traveling for the ultimate competition experience – the Culinary Olympics in Erfurt Germany in 2016.