After eight years of planning, the Galvin brothers are ready to electrify Dubai’s restaurant scene with two openings in 2017. 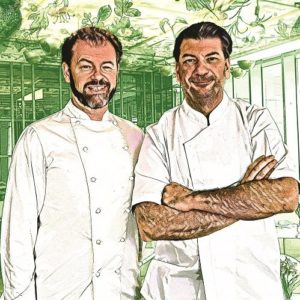 Even as they embark on their 11th opening for Galvin Restaurants, Chris and Jeff Galvin maintain they are “just two boys from Essex cooking French food”. While they have trained and worked at some of the best five-star hotels and restaurants in London, including The Lanesborough, Conran Restaurants and The Ritz for Chris and The Savoy and Marco Pierre White’s Oak Room for Jeff, the brothers haven’t forgotten their beginnings as pot washers – a job their mother also did while they were growing up.

The pair joined forces in 2005 opening a bistro “on a shoestring” and this gave way to Galvin at Windows on the 28th floor of Hilton Hotel on Park Lane, which gained a Michelin star four years later. In 2009, the chefs opened their first restaurants in the City of London, Galvin La Chapelle and Café à Vin, with La Chapelle gaining a Michelin star in 2011, while Café à Vin was awarded a Michelin Bib Gourmand. In 2012, the Galvin brothers marked their first openings outside of London with The Pompadour by Galvin and Galvin Brasserie de Luxe in Edinburgh.

“We looked and looked. Definitely there were four or five sites we could have gone to but the two of us are really old and you just learn to be a bit patient!” – Chris Galvin

However, it wasn’t until 2017 that they made the leap into the international restaurant scene with not one, but two projects on Dubai’s City Walk. The 6,039ft2 Demoiselle by Galvin, a two-floor restaurant with warm olive, airy interiors overlooking the pristine City Walk plaza opened its doors in early April, and just a stone’s throw away, Galvin Dubai – part of the four-restaurant complex next to La Ville Hotel & Suites by Marriott – is set for a September debut.

However, expanding to Dubai was by no means a brash move: the Galvin brothers had been eyeing the emirate for eight years. It was Chris, who turns 60 next year and opened his fair share of restaurants working under Terence Conran for a decade, who understood only too well that patience is a virtue.

“We looked and looked. Definitely there were four or five sites we could have gone to but the two of us are really old and you just learn to be a bit patient!” he says, explaining that finding the right partner was the priority.

“In this job it’s really tough, so if you’re doing something you don’t like, it doesn’t work.  We just thought we had the best opportunity with Meraas as a partner to do something properly, something our staff would enjoy. And the proof is in the pudding – they’ve done a great job.”

The Demoiselle brand was first launched in Harrods, London as an in-store concept. The brothers took inspiration from an art-deco home they stumbled upon during a visit to a vineyard in France. The Dubai venue, which the brothers describe as the “bells and whistles” version, is a 210-seat continental style all-day café offering artisanal options for breakfast, lunch, afternoon tea and dinner, enhanced by a selection of artisanal bread and viennoiserie baked in-house. When it comes to the menu, a few dishes have been “translated” from the London menu, such as lobster fishcakes.

Jeff says: “It’s lots of light dishes, beautiful soups, light pasta dishes, really trying to keep a feminine feel to the food. We’re not a sharing restaurant but it’s the way people eat so we provide smaller plates so you can order quite a few of them.”

On the other hand, Galvin Dubai, located in the square next to La Ville Hotel is licensed and the food offer will be much more in line with Galvin La Chappelle – fine dining but with a deformalised ambience, which Chris calls “fun dining”.

“It will be sharp and clean with super flavours, but relaxed,” he adds.

The restaurant will form one of four venues in that area, including Lima Dubai, and while each will be a restaurant offer on the ground floor, the top floors will be bar-focused and interlinked.

“Once we got our heads around Skype it became quite straightforward to meet with people, but to have people on the ground you know is important” – Jeff Galvin

“It will be distinctly different from Demoiselle,” says Jeff. “That’s why we love doing a range of concepts.” One item that is certain to appear on the menu is Jeff’s crab lasagna. “We’re like an old pop group – it’s like, ‘don’t make me cook that again!’” he laughs.

And while the menus have been designed by the Galvin brothers, they will be led by protégé executive chef, Luigi Vespero, who worked under the wings of the chefs in London for three years and had the added advantage of knowing the Dubai market, having spent two years in the emirate previously, working for Jumeirah Group.

Having support in Dubai from their existing staff was a prerequisite to the Galvin brothers’ decision to expand to the Middle East and they are delighted to have at least 14 team members from their UK restaurants working across the Dubai venues. “If we don’t have the people, we never do it; it’s all about our people,” says Chris.

Jeff adds: “Once we got our heads around Skype it became quite straightforward to meet with people, but to have people on the ground you know is important. Luigi was desperate to come to Dubai and had worked here before so knows the market. I think that would have been our challenge otherwise – getting to know the local market. I don’t think you can just step in from internationally and drop Galvin in here. You’ve got to know what the market wants.”

Having the staff present is one thing, but training them up to ensure they create a service differential for Galvin Restaurants in Dubai is key for the brothers, who believe service is how they can set their offer apart on the market.

“I think it goes right down the line,” Jeff comments. “The training they’ve been doing front of house has been incredible. It’s not just the food being great, it’s how people serve. Where we can make the biggest difference is our service in our restaurants because the standards of food in a lot of cities is amazing.

“As you become a bit older you realise you have to give people what they want. You find out what they enjoy. Speaking to customers has been a great journey because you get to understand them – it’s not a big mystery it’s just about listening to people,” Jeff continues.

The chefs already have experience of competing on the London market and they are aware that Dubai is similarly tough, and now they have the added challenge of having to build their brand name in a completely new region. However, they believe competition is a good thing, which “roots out the bad”, and they are certain there is a place for Galvin in Dubai.

Chris comments: “We’ve seen too many French chefs come to London, amazing chefs, the best in the world and they’ve gone bust within six months because they don’t understand the market. Londoners are too savvy and here in Dubai the food scene is super savvy too. We’ve been reading about it but you can’t expect to roll up and be busy. The location was critical and we’ve been really lucky.

“Lots of restaurants go under and if you don’t keep that attention to detail you will go under, so it’s the law of life. We just have to make sure it’s not us! If we weren’t confident though, we wouldn’t be here. We just know we’ll have to work very hard.”