The multi-genre urban theatre in the heart of Souk Madinat Jumeirah reveals a new range of offers, with great deals every night of the working week. 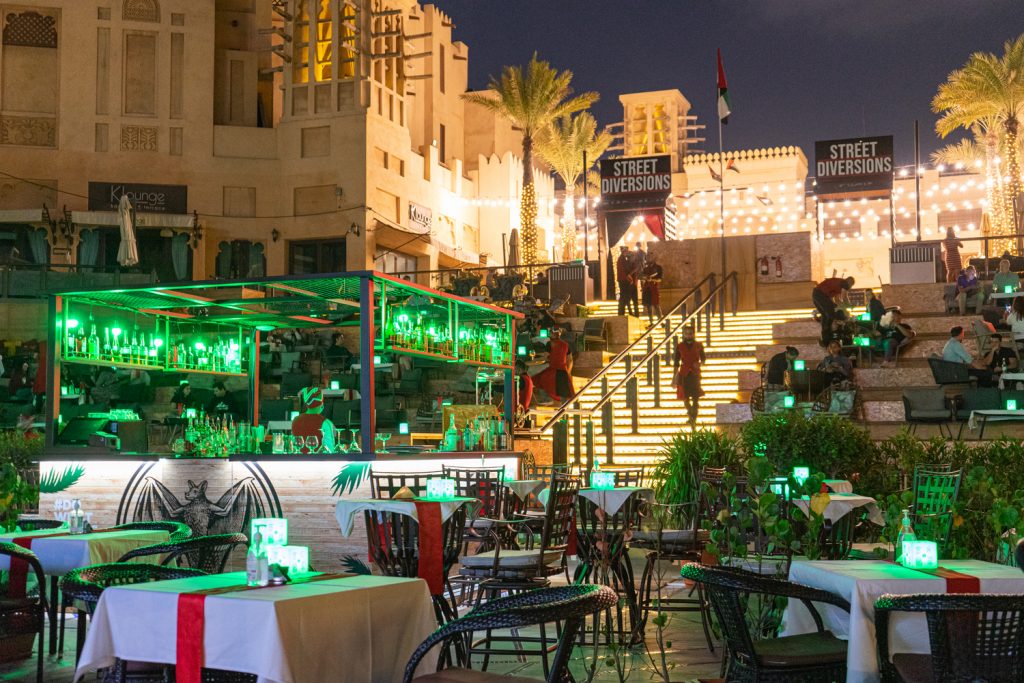 Why wait for the weekend now that Street Diversions, Dubai’s immersive entertainment and dramatic dining destination, has launched a new series of promotion nights for every day of the working week?

Announced today, the multi-genre urban theatre in the heart of Souk Madinat is offering a host of new, unbeatable weekly deals, including cheese and grape night, happy hour, ladies’ night, and set-menu dinners.

Mondays – Monday Made Me

Everybody has heard of Ladies’ Nights, but is it really the girls that just wanna have fun? At Street Diversions, the gents are being shown some love too with Monday Made Me. All men will receive three complimentary drinks when they spend a minimum of AED 150 on the venue’s popular Asia-inspired dishes between 8pm and 11pm.

Cheese the day every Tuesday at Street Diversions’ new Cheese & Grape Night. Two diners can choose between a bottle of red, white, or sparkling alongside a sharing-style cheese platter of Gouda, Pimento and Cheddar for just AED 149.

Ladies’ Night never looked so good with stunning views of the Souk Madinat Jumeirah waterways and Burj Al Arab. Girls can enjoy three complimentary drinks when they spend AED 150 between 8pm and 11pm on any food item from the diverse Pan-Asian menu, including the ever-popular Dynamite Shrimp, Sweet & Sour Chicken, and Thai Mango Sticky Rice.

Every Thursday, guests can enjoy three complimentary beverages when they spend AED 169 on any selection of Street Diversions’ eclectic shisha and drinks options. Whether it’s traditional Arabic, Premium, American, Russian, or Indian shisha or a selection of Red Bull, hops, and spirits, the promo is valid between 8pm and 11pm.

What better way to kick-start your weekend than with two hours of unlimited drinks from 6-8pm for just AED 249? Select from a range of grape, craft hops and spirits to get you in the mood for a long night of singing and dancing to some of the best Gen Z Pop entertainment.

Street Diversions features a full-time international cast of multidimensional performers from three continents, delivering an ambitious daily performance schedule that include a variety of dance, song, and non-musical performances every 30 minutes from 5pm to 12.30am every night. Dance routines include contemporary, modern, street, break, Bhangra, salsa, and abstract, while the music ranges from rap, Eighties classics, show tunes, Latin, pop, and DJ dance sets.

Open every day from 12pm until 3am, Street Diversions is situated at Souk Madinat Jumeirah amphitheatre. For reservations call: 056 303 0380.