by admin
in Catering, F&B, Interviews & Features
A A

Michael Mina is a well-known name on the US restaurant scene, particularly in San Francisco where eight of The Mina Group’s 26-strong portfolio are located, including the Michelin-starred chef’s first ever venture, Michael Mina (previously Aqua), which opened in 1991.  Some of the chef’s most recent high-profile openings include The Ramen Bar in San Francisco, Bourbon Steak at Santa Clara’s Levi Stadium, and Bardot Brasserie in Las Vegas, as well as the Mina Test Kitchen, where the chef has been conducting a three-month trial of his latest concept, Firebird Diner by Michael Mina, which is located in the new Four Seasons Hotel, Dubai International Financial Centre (DIFC) and marks the first opening for the group outside of the US.

“For all the different concepts and restaurants we launch, we run it first for three months in the Test Kitchen and customers will come and pay so we can get an idea of what they think of it,’ Mina tells Catering News during his trip to Dubai to launch the new restaurant. Similarly, to Mina’s brands Bourbon Steak and RN74, Firebird is rooted in tradition – that of the Americana diner.

“We all said how much fun it would be to take the idea of an Americana diner and turn it on its side – so it’s having the spirit and tradition of American dishes but doing them in a very refined, whimsical way,” he says. And Dubai is a perfect location for Mina to launch his first restaurant outside of the US, given his Middle Eastern heritage. He was born in Cairo to Egyptian parents and is already known for his bold flavours – acidity, sweetness, spice and richness – a throwback to the cooking he grew up with at home. Mina is now looking forward to working with the Middle East’s more “pungent spices” as he re-discovers his heritage.

“In a restaurant, every day will be better or worse than the day before so I want to have everyone in the mindset that every day it’s brand new”

“I first moved to the US when I was young, but I love Dubai. I’ve been here multiple times and I always hoped that my first restaurant outside of the US would be in the Middle East. This is the perfect place; it’s exactly where you want to be with everything that’s going on, the culture, the clientele.”

Mina was surprised on his first visit to Dubai at the level of sophistication of the diners and the quality of the restaurants. “I didn’t know what to expect when I first visited but the dining scene has exploded. I know how important dining is to Middle Eastern people. If I look at the restaurant next door, Le Petit Maison – what they’re doing and the level they’re doing it at – it makes me really happy as a restaurateur to come here because I know it can be done. The staff are here and the products are here, you’ve just got to find them.”

The restaurant, designed by the well-known and respected American interior designer and architect, Adam D. Tihany, comprises refined versions of American classics, with items such as lobster pot pie, instead of the classic chicken pot pie, a “clean” steak and eggs, elegantly plated buffalo chicken wings, Deviled eggs but with truffle, caviar or smoked salmon options, and fois gras beef sliders. Chips on fish is a play on the original, with potato chips layered over dover sole and baked so that the chips form a crust resembling the scales of the fish. Similarly, Mina’s meat and potatoes contains a twist, with steak tartare layered on top of a tater tot – an all-American deep-fried grated potato side dish. However, the hero dish on the menu for Mina, is the burger.

“We’re very famous for our burger. In the US we’ve won multiple awards for our burgers and it’s something we take a lot of pride in. I’ve taken many years to perfect it; I’ve spent a lot of time on the bun and it’s a cross between brioche and potato so it’s just the right texture for a burger. The grind of the meat is 50% short rib, 25% brisket, 25% chuck – so it’s a really nice burger that stays juicy after you cook it.”

Being located in DIFC, the restaurant is also looking to capitalise on the office crowd with a business lunch priced at AED 140, which includes a sandwich platter featuring the lobster roll, foie gras sliders, philly cheese steak and grilled cheese, heirloom tomato bisque and a kale and fresh citrus salad.

As for the sweet treats, Firebird Diner serves up refined versions of classic American house-made sodas and milkshakes, with options such as strawberry-balsamic and Nutella-coffee shakes. With the cookies and cream hot fudge sundae, the chocolate chips are removed from the cookie dough, which is then rolled like a truffle and dipped in chocolate. “It’s still all the same components but it’s done in a more fun way and it really fits with the clientele that comes to the Four Seasons, and still gives you that spirit of Americana,” says Mina. 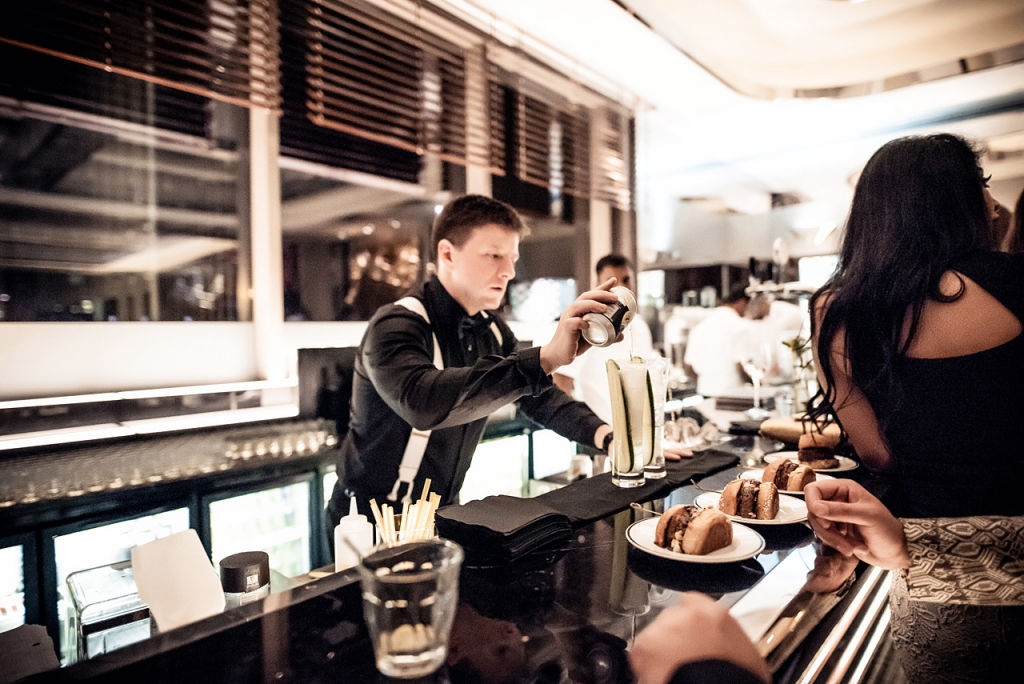 “I’ve always been a really big Four Seasons fan; I really like their philosophy with the guests,” says Mina, who adds that the staff in his restaurants are trained up to a similar standard.

“Their philosophy for guests is just like ours so it makes it much easier as a partnership and with the people that work there – we all work together and have the same mindset, which is ‘guest, guest, guest’.”

Mina brought 20 staff from his US restaurants to Dubai to open Firebird by Michael Mina, including general manager Doug Martin, who was evaluation manager F&B at Bellagio Hotel and Casino in Las Vegas where a Michael Mina restaurant operates; and executive chef Matthew Dahlkemper, the previous chef de cuisine at Locale Market in St. Petersburg, Florida. Mina is putting a lot of faith in the pair to establish his name in the emirate.

“My vision is the same with any restaurant; it’s one customer at a time. If you have a great chef and a great GM, they are like the mother and father of the restaurant. They start to build relationships with guests and then you establish your client base,” says Mina. 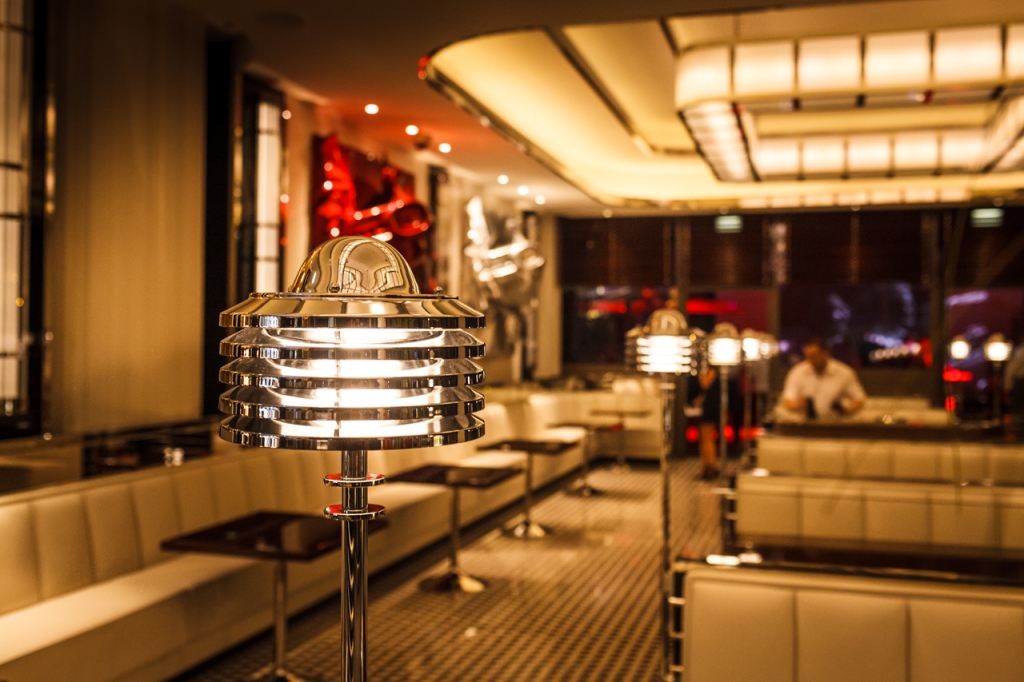 “Once people believe in me and trust my name, I can keep pushing the food. In a restaurant, every day will be better or worse than the day before, so I want to have everyone in the mindset that every day it’s brand new.”

Mina is clear that the Dubai restaurant is just as important to him as his US venues, saying “it means too much to me”, and asserting that someone from the team will visit every couple of months to ensure operations are running smoothly.  Testament to his dedication was his recent step down from the role of CEO of The Mina Group – and the takeover by well-known Michelin-starred chef Bill Freeman – in order to spend more time in his restaurants and to concentrate on his international expansion.

While the ingredients of a success story are already there – a Michelin-starred chef, an ultra-luxury hotel brand and Dubai’s culinary hub of DIFC – Mina believes that ultimately his progress in the region will depend on building Dubai-based fans. “I’m going to look to establish a local clientele that really believes in us, just like they’ve done next door [at Le Petit Maison]. If I can accomplish that, then I’ll have a long run here.”