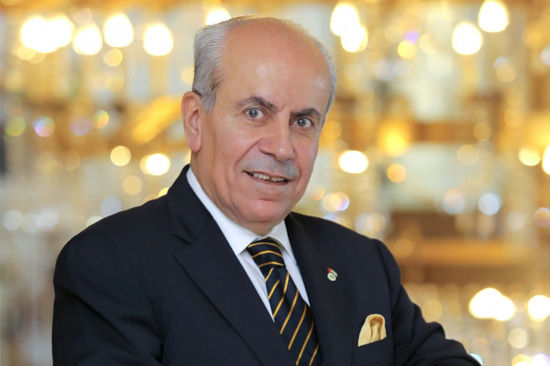 Prior to his appointment as general manager at The Ritz-Carlton Budapest, he served as chief executive officer of Habtoor Hotels from 1999 to 2011 and led the rebranding of numerous properties under the Habtoor Hospitality brand.

Abu Omar started his career as a sales executive at the Metropolitan Hotel Dubai where he spent 10 years in various positions, with an emphasis on sales and marketing until he was appointed general manager at the Dubai property in 1992. The original Metropolitan Hotel, which was built in 1979, was demolished to make way for Al Habtoor City, a landmark development incorporating three 5-star hotels and three luxury residential towers along the Dubai Water Canal. He also held the position of general manager for the Metropolitan Beach Resort & Club, today rebranded to the Habtoor Grand Resort, Autograph Collection.

Abu Omar attended Cornell University with a concentration on hotel advanced management and holds a Bachelor of Science in business management and chemistry from the University of Jordan. He has served as member of the first Hotel Committee of Dubai Department of Tourism and Commerce Marketing.

Khalaf Ahmad Al Habtoor, founding chairman of the Al Habtoor Group said, “I am delighted to welcome Rahim Abu Omar back to the Dubai headquarters and in a leadership role as our local and international hotel portfolio continues to grow from strength to strength. We have worked together for over three decades and I trust he will be successful in his new role with the hospitality division.”

Commenting on the changing landscape of the Dubai tourism sector, Rahim Abu Omar said, “Today, hoteliers face new challenges including market oversupply, taxation, and difficulty of retaining qualified staff due to opening of new hotels. I firmly believe that Habtoor Hospitality can outperform larger chains by paying more attention to detail, controlling expenses without affecting luxury standards as well as using social media and internet platforms to interact with guests. Habtoor Hospitality’s offering is by large better than major chains, the rest is easy to fix to become number one in the market.”