FEATURE: Under the influence

There is no doubt that influencer marketing is something that any hotel worth its salt has to pay attention to. Hotels all over the world have already ramped up their budgets to accommodate the rise of the influencers – according to marketing solutions provider Linqia.

Hotel News Middle East spoke to a number of experts from across the region about how the landscape is changing for industry marketing and the importance of targeting the right influencers.

Anne Bleeker, managing partner In2 Consulting, says: “We have definitely seen an increase in hotels looking to work with influencers and bloggers over the past year or so.

“However, they don’t always know what value or ROI they can expect from these engagements, or aren’t sure how to go about approaching influencers to achieve specific objectives for their business.”

The trend, Bleeker says, is showing no signs at all of abating and she expects to see hotels and hospitality businesses including influencer marketing in their 2018 budgets.

Caroline Jonsson, PR & communications manager Radisson Blu Hotel, Dubai Media City says: “Today’s customer is critical and trend sensitive and there is a necessity to create interesting personal content in order to persuade and engage with our customers.”

There is a natural synergy between hotels and influencers says Samir Arora, general manager of The Retreat Palm Dubai MGallery Sofitel.

“Hotels nowadays choose influencers and bloggers whose target audience is aligned with the property’s audience in order to reach a wider audience and create a sense of aspiration and lifestyle,” he says.

“The reach of a single influencer itself can be in the millions.”

“The tricky part to navigate is the agreement between hotel and influencer as sometimes it can become ambiguous,” she says.

“Most important is a clear conversation up front to resolve any possible complications.”

The changing role of a hotel is key to the rise of influencers and bloggers according to Svetozar Kujic, community manager Media One.

“Hotels are becoming more social spots and lifestyle hubs where bloggers can truly hang out, work and play,” says Kujic.

“We are creating internally more visually stimulating experiences and really becoming second homes to influencers who are willing to express their creative side.”

Dukes Dubai general manager Tristan de la Porte du Theil has no doubt about the main reason for the rise of influencers.

“It is down to the increasing prevalence of social media, particularly in this area of the world, where 88% of the population in the Middle East are using social media sites on a daily basis,” he says.

“The UAE mobile penetration rate is over 220% and the country is currently number one worldwide for smart phone penetration at 78%. The reach that influencers and bloggers have make them very difficult to ignore.”

Influencers give their audience the opportunity to experience a hotel’s offerings like never before, says Terje Abrams, public relations manager Fairmont Dubai.

“The consumer wants to see, hear and learn about the experience from the people among us – how was their experience with a certain product, property or brand?” says Abrams.

“They can look at the arrival experience from a Snapchat video, followed by picture-perfect Instagram photos, to a blog post, which documents in detail the number of live-cooking stations and how long one has to wait at the all-inclusive beverage station, for example.”

Bleeker also urged anyone who is under the impression that influencer marketing is simply a cheaper way of circumventing traditional advertising avenues, to think twice.

“Historically it’s been affordable and relatively easy to oversee in this market, but that’s changing quickly, with some influencer rate cards now on a par with advertising rate cards for top tier media,” she says.

“Influencers you may have worked with last year could now be charging more or differently for the same content, so it’s challenging to stay on top of the changing dynamic when seeking collaborations for different brands and projects.”

Bleeker adds that knowing how to choose the right bloggers or influencers for your brand or product can be challenging as so many people have come on-board in such a short time span – as a result it can be overwhelming and difficult to cut through the clutter.

“While many still think the follower count is the most important criteria, the numbers alone are not enough,” adds Van Beugen-Mayr, who points out the key is to find an influencer who fits your brand.

“A smaller but more engaged audience can be more useful than a larger inactive one. The influencer needs to be able to identify themselves with the brand. Always think ‘quality over quantity’.”

De la Porte du Theil warns that while social media can ensure a large audience, it may not be the specific one that you require.

“It could be an audience that has no real intention of ever visiting a particular hotel that’s been reviewed – there’s no real control of the coverage, or geographical management,” he says.

“The challenge is also to find the real influencers and quality bloggers amid an increasing trend of people looking for a free meal or hotel stay.”

The biggest disadvantage, says Kujic, is that it is still not clear how influencers should be supported and what benefits they should expect.

“Another disadvantage is that promoted content can’t look like it is advertising message and often sponsored content looks ‘sponsored’ and the authenticity is lost,” he says.

“How and to what extent we let our audiences know what content is sponsored and what isn’t, is an important consideration and one brands and businesses should address when seeking collaborations with bloggers and influencers,” she says.

It’s not simply a case of targeting the influencers with the biggest number of followers, Bleeker explains, it is about finding the right profile for each hotel.

“If you’re promoting a local product or service and the majority of the influencer’s following is based overseas, it will be very difficult to achieve the right ROI,” Bleeker adds.

Jonsson also warns about the possible pitfalls of picking the wrong influencers.

“If an influencer is posting only sponsored content, the trust disappears and the post appears less authentic,” she says.

“If you did not discuss and agree on what posts and content the influencers will create for you then you may end up disappointed with the quality and engagement you receive.”

Fairmont Dubai’s Abrams urges hoteliers to be wary of influencers and bloggers who do not have scrupulous intentions.

“It is no secret that there are lots of influencers out there, looking for free room nights or free meals, promising in return high-engaging images or professional content – promises, which often might not get delivered,” she says.

“And if the food blogger is reviewing three restaurants per evening, praising them all in a similar manner, simply because they were invited, the authenticity factor gets lost. It’s important to ensure that the transparency factor is there. Often less is more.”

How to measure the true impact of an influencer on your product is going to be the key to the future of the trend, says Arora.

“The influencer pool is ever-evolving with the development of a number of advanced tools to measure its success,” he says.

Kujic says: “These influencers need to be our everyday guests, staying with us, enjoying our brunches or ladies nights. They need to love what we are.”

The relationship between hoteliers and influencers is only going to get stronger, says de la Porte du Theil.

“The relationship is going to become more prevalent, as Generation Y gets older, then there are going to be more and more bloggers and influencers, and this is particularly true in the Middle East,” he says.

While influencers and bloggers are unquestionably a prominent fixture on the future landscape of the hotel industry, they are yet to usurp more traditional methods of promotion, says Abrams.

“I still tend to see myself as the old-school person, firstly trusting what I can touch – newspapers and magazines; and secondly the online world,” she says.

“Everyone who has a TripAdvisor account can be a travel blogger and everyone with an Instagram account becomes an influencer. I believe it’s important that brands recognise the relevant influencers and work with those who really can make a difference and bring along a measurable ROI.” 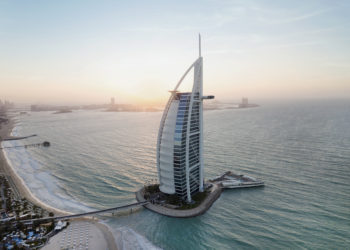