TAKE 10: Standing out in Saudi

Saudi Arabia’s vast oil wealth has kept the country’s economy largely insulated from outside influences, but a sharp drop in crude prices over the past year has placed pressure on the Kingdom’s revenue streams, leaving room for the country’s vastly underdeveloped tourism industry open to the wider world. Ismail Sirry, general manager of the recently opened Conrad Makkah lists his top 10 tips on effectively running a hotel in the region.

Over recent years the Kingdom has seen a boost in travellers for many different reasons and the Saudi government is currently investing into areas that are due to boost expected visitor number. We believe that these investments, including transport and MICE facilities, will really boost tourism revenues across the hospitality industry, especially during Umrah and Hajj. The figures are extremely positive and we are seeing a real increase in demand. I believe the Kingdom is very well prepared for the numbers that are expected before 2020.

In terms of Makkah, the Holy City will always witness a natural demand due to its intrinsic link to the religious values and beliefs of millions of Muslims around the world.  Speaking on a larger scale, Saudi Arabia has a rich cultural and religious heritage, and beautiful historic landmarks that will certainly appeal to tourists. The Kingdom also continues to be a business hub for the region, and by opening the first Conrad Hotels and Resorts property in the heart of the Holy City, we offer business travellers an opportunity to both complete their professional tasks and fulfill their religious duties.

3) Saudi Arabia as a MICE destination

There are several challenges for MICE tourism in the Kingdom currently but nonetheless it is on the rise. The government, again, are investing heavily into the MICE tourism industry and several areas will benefit from a financial commitment. The country now has over 800 conferences or meeting venues that are operational. These spaces currently host approximately 100,000 meetings per year and Conrad Makkah has also just entered into the race. As we’re a new property we’re able to tap into the MICE market by offering incentive packages and can cater to groups of up to 900 in our largest boardroom. This is something that our competitor properties aren’t able to offer yet.

We’re hoping the authorities relax restrictions on visas for Muslim pilgrims and allow those travelling to the city to extend their stay and visit non-religious sites. Saudi is such an incredible country and we have attractions that will encourage tourists to travel much further afield, taking adventures across other parts of the Kingdom. Makkah is to witness in excess of 30 million religious tourists by 2030 and there is only so much room for new accommodations in the region. We’re looking forward to the new railway that will link Makkah-Jeddah-Madinah to help the flow of travellers.

The green card initiative is extremely welcomed across Saudi and the expatriate community. At Conrad Makkah we welcome the initiative to attract investment and highly talented workers and as a brand we will continue to support Saudisation as well. Our development programmes are not restrictive and we’ll encourage employees to grow in the hospitality industry as much as they can. 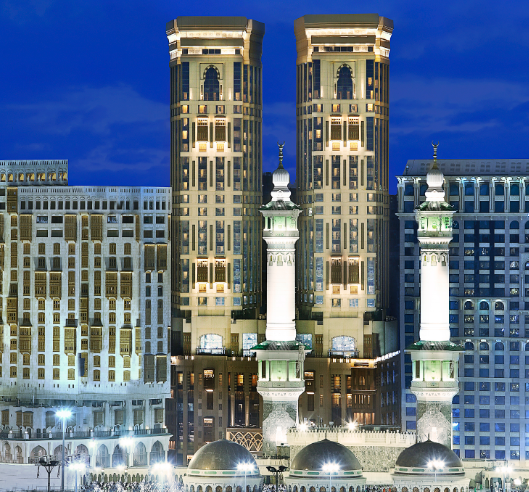 One of the largest challenges we faced when opening Conrad Makkah was around recruitment but as we’re under the Hilton brand we had support from our sister properties in the Kingdom. Some were able to help bring in well-trained team members which made things run smoother. The hotel has now reached 45% Saudisation and we’re employing a lot of Saudi talent that we can build and grow with a strong development programme.

Another more obvious challenge is the increase in supply of rooms that is not countered by similar increase in demand yet. We project that in the coming few years, several factors will positively impact demand; namely, the new airport in Jeddah, the new King Abdul Aziz road between Jeddah and Makkah, the operation of the train between Makkah-Jeddah-Madinah, the Mataf and Haram expansion construction works and the introduction of new budget airlines. These factors will help enhance demand to meet increase in supply of rooms.

The infrastructure can pose challenges in Makkah especially with the road closures, however with the new project of Al Haram completion, it has had a hugely positive effect on travellers and movement. The development of the Haramain High Speed Railway and the Makkah Mass Rail Transit System, plus encouraging the increase of the number of visas is enhancing the country’s economy on a great scale.

At Conrad Makkah we have five executive floors with an executive lounge service and butler service, and our standard room is 56m2, which is considered the largest you can find in Makkah. This was all created to enhance our guests experience of the Holy City. We have one of the best locations to the Haram due to a private entrance for the entire development- a massive plus for pilgrims. Conrad as a brand also offer the 1/3/5 programme which allows guests to discover local culture from an insider’s perspective and we are the only hotel that offers sightseeing in Makkah.

When looking at trends over the past five years it shows that guests’ expectations have shifted towards the use of technology when travelling and being able to interact anywhere in the world. As Conrad Makkah is a newly opened luxury property the hotel has been designed to adapt to current technologies without over exaggerating the facilities, make things less complicated. We offer the usual complimentary Wi-Fi with plasma TV and iPod stations, but all blinds, lights and commands are by simple switch.

Today, more than ever before, global travellers tend to rely on mobile technology to create their own unique experiences inspired by local surroundings, while at the same time stay connected with people and places around the corner, and half way around the world. Whether it’s finding out the best places to taste traditional food or checking-in while in-transit from the airport, travellers can access a variety of features, all from the palms of their hands. The majority of travellers come to Makkah to perform Umrah and Hajj, and mostly their time is at a premium. If they have one hour left to explore the city, they want to know where to go and what to see in an easy-to-access, convenient way. Concierge apps can help hoteliers create many ways that can turn their guests’ experiences into one-of-a-kind, memorable stays.