President and CEO of the Jumeirah Group, Gerald Lawless is set to move on from his leadership role after 18 years in which he helped build the 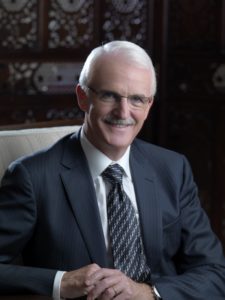 company into Dubai’s flagship leisure group and one of world’s fastest-growing hotel chains.

Dubai Holding, Jumeirah’s parent, announced that Lawless would head up tourism and hospitality strategy at the government-owned company. In recognition of his achievements at Jumeirah, he will become the honorary president of the Jumeirah Group.

He will be replaced by Jumeirah’s chief executive, Stefan Leser, who for the past 10 years had been in senior executive positions at Kuoni, the Swiss-based travel business.

With 30 years’ experience in the Dubai leisure industry, Lawless has overseen the expansion of the Jumeirah portfolio to become an international brand, with 23 hotels in 12 destinations from London to Shanghai, and with an ambitious pipeline of ventures planned. It also operates 100 restaurants in the UAE.

Mohammed Al Gergawi, the chairman of Dubai Holding, said: “We appreciate the role that Gerald has played as the founding CEO of Jumeirah and its subsequent expansion. As a tireless ambassador for tourism and hospitality in Dubai, he is a leader admired across the industry for his commitment to innovation and excellence in the field of luxury hospitality, and has been an inspiration to Jumeirah employees, to guests and to other stakeholders in the sector.

“Jumeirah has been a consistently valuable engine of international growth for Dubai Holding, and its future expansion will further enhance that impact. We are delighted to have the opportunity of benefitting from Gerald’s expertise in building our own integrated vision for the hospitality sector,” he added.

Mr Lawless said: “It has been an immense honour and privilege to have been entrusted with setting up the Jumeirah Group, with the development of its outstanding portfolio of luxury hotels and other businesses.”

He will also become chancellor of the Emirates Academy of Hospitality Management.