Nakheel has officially opened the first of 10 hotels planned under its hospitality and leisure expansion, with a new, 251-room hotel now open at Dragon Mart retail and leisure hub. 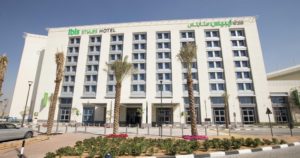 “The delivery of our first hotel is a major milestone for Nakheel, marking the start of an exciting hospitality expansion programme that is set to bring 10 new hotels and resorts to Dubai,” said Lootah. “A hotel at Dragon Mart is a natural progression for this ever-growing retail and trading hub, and I am immensely proud to celebrate its opening today.”

Also commenting on the official opening, Oliver Granet said: “We are very excited to develop the ibis Styles brand with Nakheel in a location as vibrant and dynamic as Dragon Mart. This brand is a guest favourite in AccorHotels’ global portfolio, being famous for combining comfort with conviviality. We expect leisure and business travellers in the area to find a unique and affordable hospitality solution in the trendy ibis Styles Dragon Mart.”

The ibis Styles hotel is one of two to be delivered at Dragon Mart and one of 10 in Nakheel’s planned hospitality expansion. As of now, the company has seven hotels and resorts – with nearly 3,000 rooms between them – open, under construction or in design stage: