The Chef’s Table dining events are back on the menu for the emirate’s food fans, as the Abu Dhabi Culinary Season offering returns to the UAE capital for a month-long themed campaign throughout August.

The offering is the first of five similar activations launched by the Department of Culture and Tourism – Abu Dhabi (DCT Abu Dhabi) to be rolled out over the next 12 months.

The Chef’s Table theme is ‘Travel Through Food’, with the special, travel-themed events taking guests on a gastronomical journey through five sumptuous courses carefully curated by 11 of Abu Dhabi’s best chefs, each showcasing the cuisine of their restaurants and drawing on inspiration from across their lives and careers.

During the month of August, various gastronomic ‘destinations’ will be represented, including India, Peru, Italy, Japan, the Middle East, France and other and European cuisines.

One participating outlet is Indian restaurant Punjab Grill, where Brand Executive Chef Sandeep Ail is excited by the ‘Travel Through Food’ theme.

“This Chef’s Table theme ‘Travel Through Food’ lends itself beautifully to the diversity of Indian cuisine, where 28 states boast their own cooking flourishes, making every bite an adventure for the hungry traveller,” says Ail, whose outlet is famed for traditional flavours fused with modern cooking techniques to deliver memorable dishes such as Bengali Coconut Prawns, spicy Malvani Duck Breast and Farmfresh Buratta Salad.

“Whilst nothing can replace the cool breeze on the Cote d’Azur, Fouquet’s menu has been passionately curated to transport food connoisseurs right to the heart of the iconic destination,” says Balveer Balkissoon, Executive Chef of Louvre Abu Dhabi’s highly regarded restaurant. “I truly believe the secret ingredient behind every dish on the menu is my passion for cooking French cuisine.”

Part of a wider seasonal initiative to encourage UAE foodies to explore a world of diverse culinary experiences in the safe and secure surroundings of Abu Dhabi this summer, the Chef’s Table series is one of several activations which are set to transform the Abu Dhabi Culinary Season event into a year-round programme of F&B experiences.

In addition to Chef’s Table, Abu Dhabi Culinary Season will also feature an expansive roster of ‘Dine & Stay’ packages at top hotels across the emirate, from beach stays to city breaks and even desert retreats. There will also be discounted menus on offer, covering all budgets, which will be run in partnership with Zomato. There will also be Big Brekkie Adventures, which will highlight the vast array of international breakfasts available in the UAE capital.

Menus for the Chef’s Table series cover both vegetarian and non-vegetarian options and are priced at AED 350 for five courses.

Other installments in the series will include September’s ‘An Emirati Twist’, which is expected to encourage locals, expats and tourists alike to connect with the rich history of the UAE. 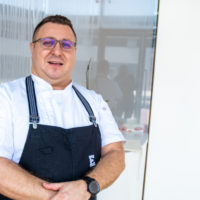