With an increase in cross-regional acquisitions and investment in the hotel sector, Simon Townsend, director strategic consultancy valuation, CBRE Research reveals why Middle Eastern investors are not solely concentrating their hotel investments in the domestic market, but diversifying their reach through luxury assets globally.

While the Middle East remains a comparatively small investment market, investors are focused on development plays and increasingly on alternative investment classes, such as hotels, residential, education and healthcare. We can expect to see a continuation of the current land speculation trend, which has been responsible for pushing up land prices in many regional markets. However, as witnessed recently in Saudi Arabia with the implementation of a new tax system for undeveloped land, regional governments are becoming more proactive in their structural reforms as they seek solutions to lower oil revenues. The long-term picture is likely to look somewhat different. Expectations are that a more formal institutional market will eventually exist, in a region where there is already world class infrastructure, a growing number of high quality office schemes suitable for international corporate tenants, strong local demand for prime retail, and a large number of high profile hospitality and residential properties, which combined, could establish a very solid base for developing an established investment market. 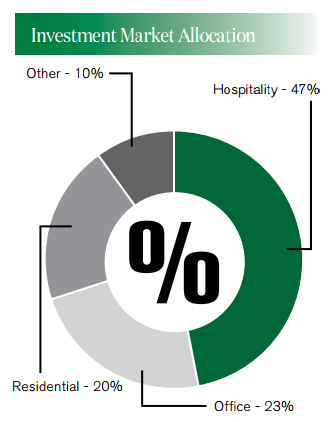 Global currency fluctuations over the past two years have made the Middle East a far more expensive investment destination for a large portion of foreign capital. With the majority of the region’s economies pegged to a dollar weighted basket, the recent strength of the greenback has had a broadly negative impact on overall deal volumes, constraining investor appetite and creating more attractive external destinations for real estate investment. Since early 2014, both the British pound and the euro have lost around 20% of their value against the US dollar, whilst the Chinese yuan and Indian rupee have fallen by around 7%, making dollar denominated or linked purchasers, such as investments into Middle East markets, significantly more expensive. The same fluctuations have also had a negative impact on major regional tourism markets, such as Dubai, with many key source markets suffering from reduced spending power, which has contributed to the slide in hotel Average Daily Room rates. However, whilst the Middle East may have become less attractive from a currency perspective over the past two years, European markets have inversely become increasingly appealing for outward bound capital, at least until the recent uncertainty brought about by the UK’s BREXIT vote which has subsequently clouded the picture.

Many GCC nations are looking to rebalance their economies so that they are less dependent on the volatile commodities market and the tourism industry is one of the industries being targeted. Across the region there are many examples of key infrastructure development: transport gateways, malls, theme-parks and exhibition centres, all of which help to drive visitor numbers. A further consequence is rapid expansion in the region’s hotel bed stock.

Investors and operators within the region have shown a strong belief in this economic goal. Encouraged by government incentives, they have committed to substantial hotel development despite the challenging trading landscape. There are 256 hotels (81,951 rooms) currently under construction in the GCC region, so the rapid supply growth will continue in the short to medium term. However, as a result RevPAR has fallen sharply in 2016. Sovereign Wealth Funds (SWF) and Ultra High Net Worth Individuals interest in high quality assets remains robust. This is shown by a number of recent transactions. Al Habtoor Group, on behalf of a consortium, recently purchased the palatial Hotel Imperial, Vienna for €70m (€507,246 per room, yield of circa 3%). This was their seventh overseas hotel investment and second in 2016. Nozu Hotels and Resorts also completed the purchase of The St. Regis and The Westin Excelsior hotels in Florence. Both are considered destinations in their own right owing to their cultural and historical values.
Between 2008 and 2015 more than half (60%) of the investment in hotels from the Middle East has been into Europe. However, there are signs that investors are increasingly looking elsewhere as well. Most notable have been ADIA’s acquisition of a 50% stake in three major hotels in Hong Kong and Al Faisal Holding’s of The Manhattan at Times Square. In total, Middle Eastern investors purchased over $4 billion of hotels in Asia and America in 2015. This was more than in the previous seven years combined. The region’s SWFs and Ultra High Net Worth Individuals (UHNWI) typically seek stability and security in their investments.

As a result they have not concentrated their hotel investment in the domestic market. Instead, they have diversified through the acquisition of high-end, luxury assets globally. Such hotels attract significant investor interest. However, Middle Eastern investors’ low cost of capital and long-term outlook means that they are often able to out-bid the competition. The number of trophy hotels in Western European capital cities is limited and they seldom come to market. As a result, Gulf capital appeared to be moving further up the risk-curve. In 2014 and H1 2015 there were several hotel transactions outside the luxury tier and in less recognised cities. However, circumstances have changed. Since the middle of 2015 GCC investors seem to have returned to their risk-averse approach. 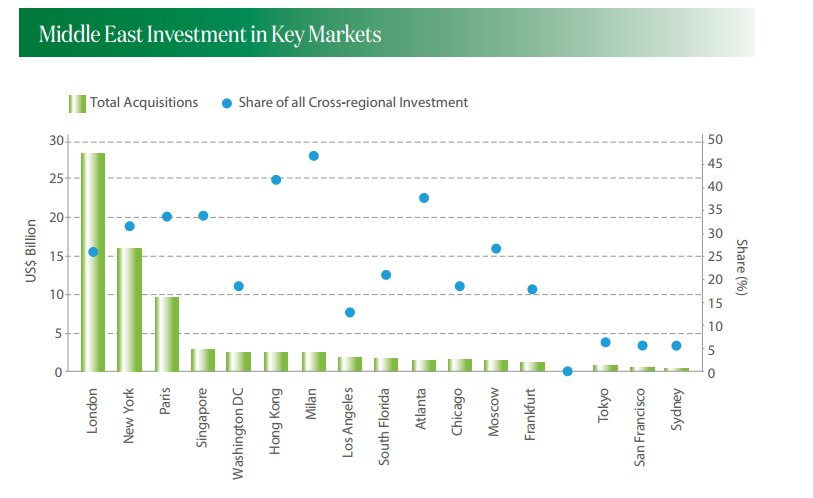 As is discussed elsewhere in this report, that change has not been limited to the hotels market or indeed to investors from the Middle East. Our expectation is that the low oil price and general risk aversion will continue to shape Middle East investors’ hotel investment. The result will be a more cautious approach and further concentration in very high quality assets, for which the price is high but the risk is relatively low. Lack of trophy asset opportunities has also resulted in other approaches to de-risk investment. The use of third-party operators has become more prevalent in the wider-hotel sector and is now being adopted by Gulf investors. It is also worth remembering that not all investment originating from the Middle East is the same. There are Middle Eastern investors with strategies very different from those typical of the region’s capital.