Fine dining restaurant, Khyber, has marked its first venture outside of Mumbai with the opening of a restaurant at Dukes Dubai on Palm Jumeirah. 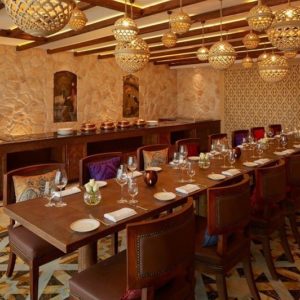 Located on the 15th floor of the hotel, the celebrity-endorsed venue serves traditional north Indian cuisine and will officially open on 25 July.

Owner, Sudheer Bahl, said: “Khyber is an iconic name, anybody who talks about Mumbai, knows about our restaurant and Dukes Dubai is the only venue that can recreate its splendour; the hotel is palatial, regal and looks magnificent.”

Khyber has a capacity for up to 162 guests including 40 diners on the terrace. It features a live cooking station and private dining options.

The Indian hotspot is a favourite of Sir Paul McCartney, Amir Khan, Richard Gere, Demi Moore and the Kuwait Royal Family, among others.

Specialising in authentic north Indian frontier food, best described as Ambrosia – the food of all the gods – dishes are based on fish, lamb, chicken and vegetarian recipes.

Desserts include Rasmalai, sweet dumplings of cottage cheese served in sweetened flavoured milk, garnished with pistachio and almonds; Phirni, a traditional firm rice and milk pudding flavoured with aromatic spices; and seasonal Gajar Ka Halwa, a Punjabi dessert made of grated carrots, almonds, raisins slow cooked in sweetened milk and flavoured with mawa.The restaurant has been designed by architect Ayaz Basrai, founder of The Busride Design Studio and resembles the original Mumbai outlet but with a contemporary twist.

Abdulla Bin Sulayem, CEO, Seven Tides International, which owns Dukes Dubai, commented: “We have worked closely with the Bahl family to ensure the new Khyber restaurant captures the true essence of the concept and we look forward to welcoming our first guests for dinner when the restaurant opens later this month.”

Bahl added: “We have been searching for the perfect partner for the last ten years. Entering the UAE for the first time is an important step for us in terms of international growth and, with the help and guidance of Seven Tides, we are sure to make it a big success.”