A museum, a library, traditional alleyways, luxurious baths, a gramophone to play your vinyl records inside the rooms, and a slightly tilted circular wind tower are just a few things that will catch your eye when you visit the recently opened Al Bait Sharjah. The boutique property, which is valued at AED200 million, is home to 53 luxury rooms and suites, and Mahak Mannan spoke to general manager, Patrick Moukarzel on what makes the property stand out in the region. 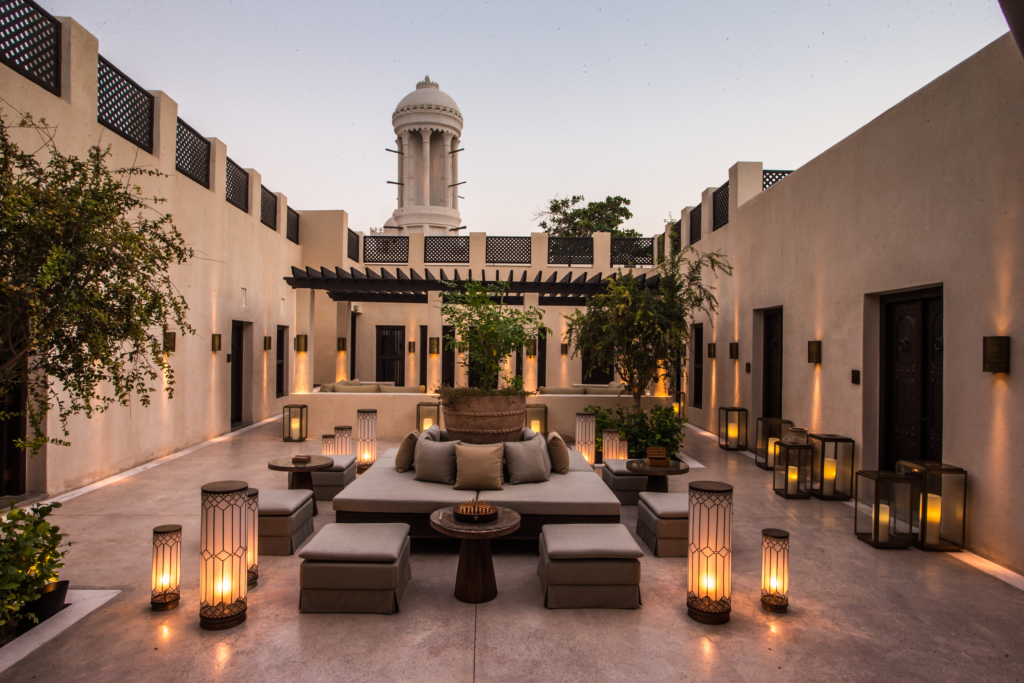 If you recall walking around the souqs of the UAE about two decades ago, a walk around Al Bait Sharjah is sure to
give you the feeling of nostalgia, an ode to traditional Emirati culture.

Al Bait, which translates to The Home,’ is part of an Emirati conservation project in Sharjah spearheaded by the Sharjah Investment and Development Authority (Shurooq). The hotel is the latest on GHM’s international list of hospitality properties and features a collection of four heritage houses once owned by local families. Apart from its 53 rooms and suites, the 10,000sqm property features dining offerings inspired by Middle East and Far Eastern cuisines, a luxury hammam, a helipad, a fleet of 2019 Mercedes cars, and an iconic 1967 Mercedes Pullman limousine.

“Al Bait Sharjah is a dream project and a sentimental one too for both, GHM and Shurooq. All the stakeholders wanted to
make sure that no stone was left unturned to ensure a grand and meaningful opening,” says Patrick Moukarzel, general manager, Al Bait Sharjah.

The hotel is part of the Emirate’s largest historical preservation and restoration project called Heart of Sharjah. The heritage project, planned over a 15-year period and targeted for completion by 2025 aims to revitalise the district and restore the culture and stories of the past.

“Knowing the history of the Emirate and this area specifically, whilst incorporating GHM standards took some time but we wanted to do a splendid job. The pre-opening team is crucial to any property, while some of the executive members including me are from GHM, the others were handpicked on the basis of their persona, energy and passion towards this industry. Skills can be taught, but we needed people with the right attitude,” Moukarzel continues.

“The opening of the property meant the world to us. The fact that HH Sheikh Dr. Sultan bin Muhammad Al Qasimi, the ruler of Sharjah handpicked the opening date so he could be a part of the ceremony advocates how much it means to everyone.” 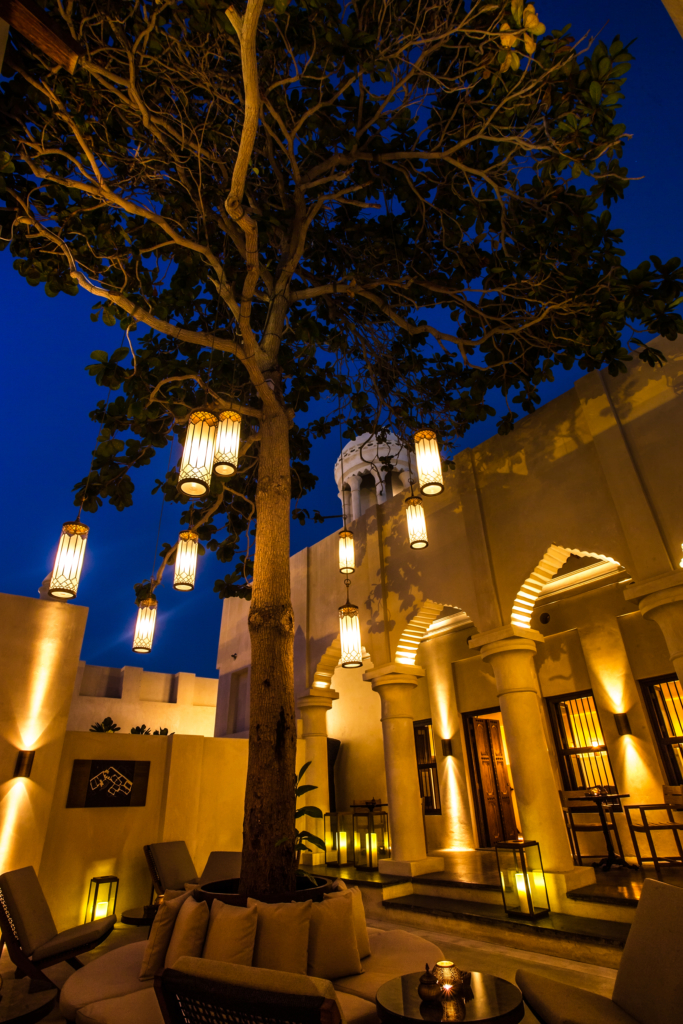 This is GHM’s first property in the UAE and is also listed as one of the Leading Hotels of The World.

“Al Bait Sharjah is a sanctuary where the traditional and contemporary meet. The architectural language of this heritage resort is a nod to Emirati aesthetic with finer touches of luxury. The concept of the luxury resort highlights Sharjah’s quintessential charm, through the restoration of four heritage homes, once owned by influential Emirati families that had a significant impact on Sharjah’s history, and will remain an important part of Al Bait Sharjah’s legacy,” according to Moukarzel. 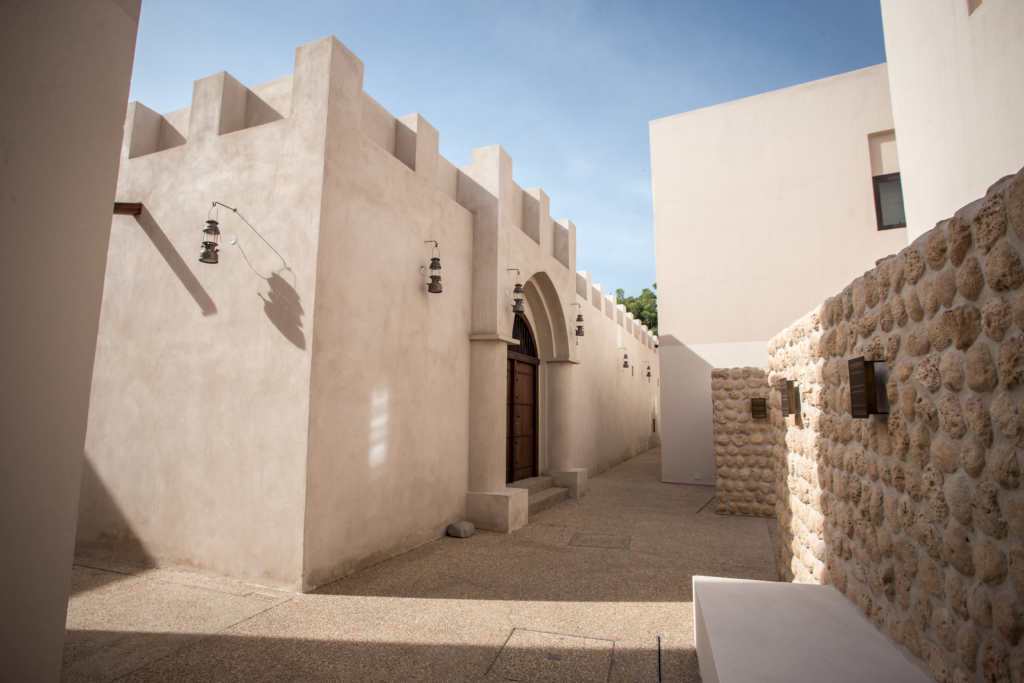 “The unique architecture of the resort revives the heritage of the region whilst integrating with the historic fabric of the emirate of Sharjah. However, the most unique aspect of the resort has to be the museum and the library, located in Bait Ibrahim Al Midfa heritage building. Restored with a focus on preserving the traditional significance, the spaces are inter connected. Home to antiquarian and literature dating back centuries, the museum and library allows our guests to immerse into the region’s history, art, and culture.”

A key feature of the hotel is the slightly tilted circular wind tower, which has been restored with utmost care to ensure it is standing as close as possible to the original structure.

Speaking about the families who used to once call the ruins of this hotel, home, Moukarzel says: “Some of Sharjah’s most prolific and influential families used to reside in the five houses. The most renowned being Al Midfa family who were based here for generations and most of the heritage buildings are named in their honour. Heart of Sharjah wasn’t just a residential stronghold of influential families, but also served as a trade hub and meeting place for Bedouins. Now, the bylanes of this marketplace are dotted with quaint stores selling antique silverware and handcrafted goods, exquisite perfumes, and carpets, almost as if time stood still here. Interacting with the souq’s vendors, where guests have direct access to, gave us great insight about the history of the place and how it used to be half a century ago.

“Ibrahim al Midfa, whose bait and majlis are part of Al bait resort, was a very prominent persona in Sharjah’s history having served as a secretary to four rulers of Sharjah until 1983. He was the author of the first published newspaper in the region, Oman Newspaper, which was handwritten weekly in six copies. His bait was also home to the first post office in the Trucial States and his majlis was the meeting place for local businessmen and prominent members of the society.” 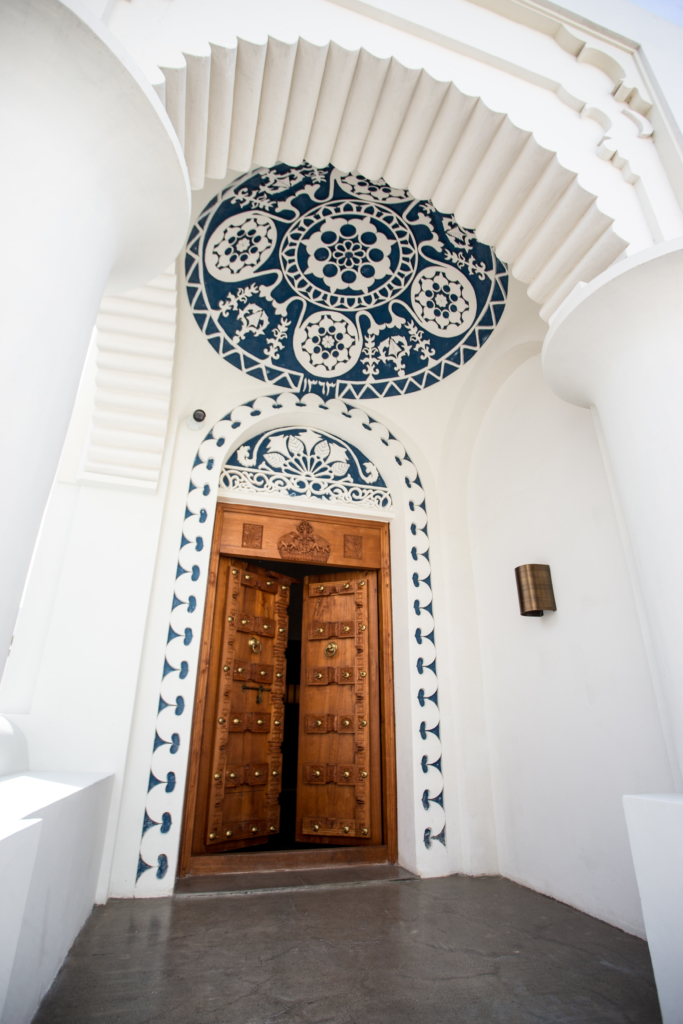 Some of Ibrahim Al Midfa’s personal belongings like a marble inkwell, a pen made out of wood, and a parker watch are on display in the museum along with other artefacts from the Sharjah Museums Authority Collection.

“Making the most of the unique setting of the resort, our aim was to highlight the legacy of the area and be able to tell a compelling story to our guests about the place, the people who used to live here, and what it meant in the history of the region,” Moukarzel explains.

“Our library offers a broad selection of local and international titles on the history of Sharjah and the region in English, Arabic, and German. Our guests can also browse through albums, read local bestsellers, and play games popular amongst the Emiratis.

“The narrow pathways and the souq around the resort lend an old charm to the resort. The restoration team has gone to great lengths to preserve and highlight the beauty of the coral walls and restore the region’s only circular wind-tower to its former glory. 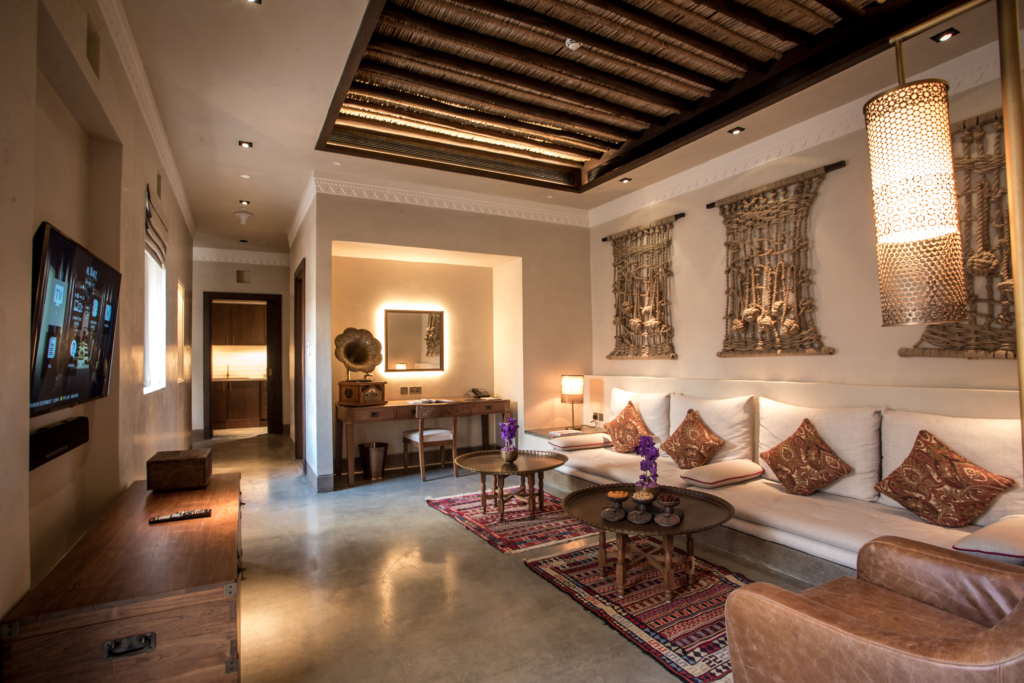 As with any new project, the journey to the completion of al Bait Sharjah was not an easy one, “There were surprises along the way but all pleasant ones. We were discovering new aspects of this area daily. From the coral walls to the trees, every element of the surrounding had a story attached to it. While we wanted to preserve it, we also wanted to retain the essence of the Heart of Sharjah. During the last stage of the hotel’s restoration and construction, we discovered a mosque underground just beside the entrance. The contractors, along with international archaeologists, are now working on restoring the mosque and preserving it to the best of its form,” Moukarzel says.

“We at Al Bait don’t believe in challenges. We see everything as an opportunity. With the opening and the first guests arriving at Al Bait,
we now have the opportunity to put months of training and skills into practice and improve our offerings, based on feedback.

“We measure success from a 360-degree angle. Our success is not only quantified by the revenue or bookings, it’s predominantly hinged on the satisfaction of our guests as well as our teams who are passionate and have worked hard to make this project a success. We also look at the interest in Sharjah as a destination for travellers eager to learn about the history and culture as well as enjoying luxury experiences.”

Now that the property is open, Al Bait Sharjah aims to become one of the leading destinations for travellers coming to the UAE looking to get an authentic cultural experience.

“Al Bait Sharjah is an extremely unique property, offering a very niche product. We offer ultra modern luxuries in the historic Heart of Sharjah, integrating the resort’s offerings with the souq and museums. With Sharjah serving as the cultural hub of the region, Al Bait Sharjah is ideally located to attract locals and tourists alike. We don’t believe that we have a competition in the region,” says Tetyana Polunina, director, sales and marketing, Al Bait.

“Due to its ideal location in the Heart of Sharjah, the resort will become a prime hub for travellers seeking a true Emirati experience in a luxurious setting. Nestled in the midst of museums and popular tourist spots, we expect the resort to further integrate with Sharjah’s focus on art and culture.”