Dubai Chamber of Commerce and industry analysts have revealed  forecasts of an 11% growth in the global Islamic tourism market share by 2020 in the wake of a high demand for halal tourism.

According to MasterCard data, the global Islamic travel market was estimated to be worth $145 billion in 2014, as the number of Muslim travellers reached 108 million worldwide, which accounts for 10% of total global tourism. This market share is projected to reach 11% by 2020, as the number of Muslim visitors is set to reache 150 million which will see their expenditures grow to $200 billion. 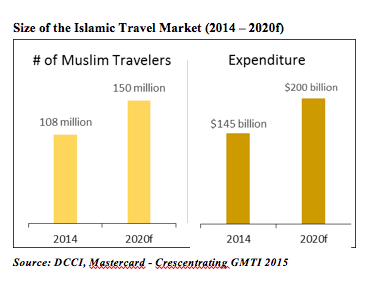 This observation is supported by two major factors including the above average population growth in Muslim dominated countries and healthy economic growth of Muslim communities, located within emerging economies.

The study also revealed that compared to the 2012 market size of $130 billion, global Islamic travel has expanded by a cumulative 11.5% over the course of the past 2 years; and is expected to keep growing at a compound annual growth rate (CAGR) of 5.5% until 2020.

According to the Travel and Tourism Competitiveness Index (2015), UAE is ranked 24th globally, and 1st in the Organisation of Islamic Cooperation (OIC) category; while Malaysia followed closely with a global rank of 25. However, in terms of Islamic travel friendliness, Malaysia is ranked 1st under the global Muslim travel index (GMTI) based on criteria set by “Crescentrating”, a leading Islamic travel rating organisation based in Singapore. UAE came 3rd according to the 2015 index.

The key set of criteria behind the ratings in the below table includes the country’s suitability for family holidays, the type of available Muslim-traveller-friendly services and facilities, as well as guides and other marketing initiatives dedicated to promoting awareness on Islamic travel services and facilities.