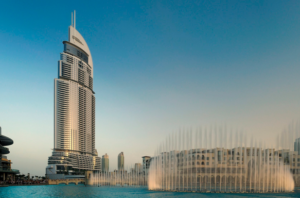 Properties has appointed DUTCO Group to reopen the hotel in what the company state to be in “record time.”

In a statement, the Dubai-based property developer said it is coordinating with the concerned government entities including the Dubai Police, Dubai Civil Defence, Dubai Municipality and Dubai Electricity and Water Authority, among others, to expedite the work.

DUTCO Group has a proven track record in mega-developments having earlier been assigned the task of building The Dubai Mall, the world’s largest mall, by Emaar. The company is also currently undertaking the expansion work of The Dubai Mall.

A team of international consultants has already been mobilised by DUTCO Group, who are now on site and working round-the-clock. Cleaning work has started with the mechanical, electrical and structural assessment of the building and restoration also underway.

“We are committed to expediting the reopening of the hotel in line with the directives of His Highness Sheikh Mohammed bin Rashid Al Maktoum, Vice-President and Prime Minister of the UAE and Ruler of Dubai. We are demonstrating the can-do ability of Dubai with our focus on opening the hotel in record time using the best in design, quality and technology,” said Mohamed Alabbar, Chairman of Emaar Properties.

“The Address Downtown Dubai is our first hotel project and it has set international benchmarks with its excellent hospitality standards. We will restore the project to its glory and even surpass its grandeur that befits the prestige of the city and Downtown Dubai. We are working with all Dubai government entities to expedite the construction work,” he added.