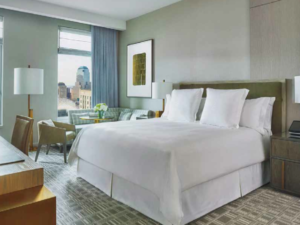 Four Seasons Hotels & Resorts has announced plans to expand its global footprint with 12 new hotel openings over the course of 2016.

Three of the scheduled 12 hotels will open in the GCC including the hospitality brand’s first hotel in Kuwait. The First Four Seasons Hotel will open in Abu Dhabi, boasting 200 rooms at Al Maryah Island in the heart of the new Central Business District.Other openings include the brand’s second Dubai property which will open in Downtown Dubai and host 106 rooms. Marking the brand’s initial entry into Kuwait the Four Seasons Hotel will be situated in Burj Alshaya, the central busi- ness district with 263 rooms.

Additional properties include Bogota, Colombia, the second of two additions to the brand’s South American portfolio, the modern, 64-room hotel will also introduce a new Japanese concept restaurant to a city that is receiving growing international attention.

Kyoto, Japan will be an 124- room hotel marking the second property in the region and will be situated close to the city’s his- toric Higashiyama-ku district.

New York, USA Four Sea- sons will be located in Lower Manhattan in the Tribeca district and just a short city stroll from the new World Trade Centre. The new property will host 185 rooms and joins its sister hotel in Midtown, offering travellers two options in the city. The Robert AM Stern Architects building with interi- ors by Yabu Pushelberg will also be home to an exclusive spa and fitness facility.

The Oahu, Hawaii, USA property will arrive as the fifth resort on the island and is set to have 358 rooms. The Four Seasons Resort O‘ahu at Ko Olina is situated on the beachfront on the island’s sunset coast, with easy access to recreational pursuits, historic sites and shopping.

Surfside, Florida, USA will be an exclusive 77-room hotel with a 9-acre complex with 965 feet of Atlantic beachfront with more than 40 beach caba- nas amongst landscaped gardens and four pools.

In Tianjin, China, underscoring the continued strategic importance of China as both an inbound and outbound travel market, the 259-room Four Sea- sons Hotel Tianjin will be the brand’s ninth hotel in the coun- try. Part of a mixed complex with an office tower and retail stores, the Hotel is in a pedestrian friendly area near Nanjing Road, the city’s main east-west thoroughfare and Bingjiang Avenue, the city’s major shopping area