Today marks the opening of the 21st edition of Gulfood, the world’s largest food and hospitality trade show.

Gulfood will take place from 21 – 25 February at at Dubai World Trade Centre (DWTC).

The multi-channel event, which includes the third edition of Halal World Food – now the largest annual Halal food sourcing trade event in the world- will feature 5,000 international companies from 120 countries and 117 trade and industry pavilions. 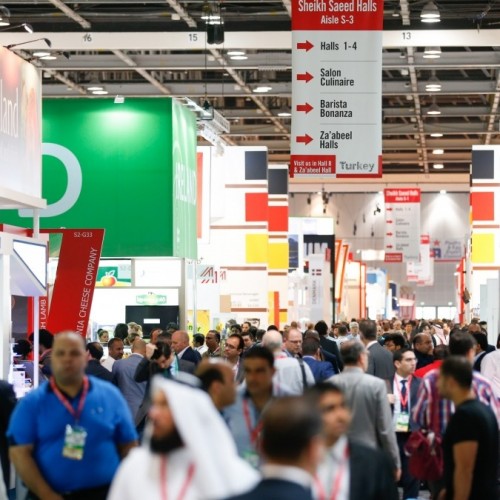 Trixie LohMirmand, senior vice president, exhibitions and events management, DWTC said: “The rise of Gulfood is down to a number of key factors including Dubai’s global standing as an import and re-export hub, the emirate’s growing sea-air transport links expanding its geographic trading footprint and the strategic importance placed on the domestic and regional tourism and hospitality industries.”

The 5,000-plus companies will occupy in excess of 1.29 million ft2 of space, including two purpose-built, temporary structures and expanded indoor exhibition space across three new DWTC halls – Za’abeel 4, 5 and 6.

“For the retail, foodservice, catering and hospitality industries, Gulfood presents an incredible sourcing opportunity with hundreds of new product launches, innovations in health and special diet, and an even wider range of ethnic and speciality foods,” added LohMirmand.

“For the wholesale, food import and export buyers, the multi-million dollar transactions made at Gulfood will set pricing benchmarks throughout 2016. This is why market-makers and the biggest traders from around the world attend Gulfood – it’s where the big deals are made, company to company and country to country.”

Russia’s Gulfood debut is being led by the Federation’s Minister of Agriculture, His Excellency Alexander Tkachev and marks the launch of a global export sales push for the country’s leading food producers.

Japan, buoyed by record 2015 agricultural, forestry and fishery exports to the UAE amounting to AED 214 million (US $58.3 million), has expanded its pavilion by 150%.

Eighty Brazilian companies are looking to build on the country’s 2015 exports to the GCC reaching almost US $4 billion, with the UAE absorbing nearly a third.

The pavilion will promote products from poultry to fruit and dairy and will have two restaurants – a steakhouse BBQ and general food outlet where a Brazilian chef will prepare typical food and shawarma with Brazilian chicken.

Gulfood stalwart France has 71 food and beverage companies and 28 foodservice equipment providers in a pavilion where experts in the Saudi Arabian, Lebanese, Egyptian, Indian and Kenyan markets will be on hand to facilitate business.

Meanwhile, Spain is launching its biggest ever Gulfood campaign across 1,404m2 of exhibition space.

Under the umbrella of the Spanish Trade and Investment body (ICEX), 197 food companies are participating at the show, while the Spanish Exporting Manufacturers Association for the Hospitality Industry (AFEHC) is bringing another 28 specialist hospitality and foodservice equipment companies.

Long-standing Gulfood partner Egypt has 125 companies at the show and a much wider, multi-commodities exhibitor profile ranging from freshly frozen fruit and vegetables to chocolate biscuits, dairy and dates.

Pakistan’s revitalised food and beverage agricultural industry is launching a major export push at the show with 51 Pakistani companies in a country pavilion led by the Trade Development Authority of Pakistan (TDAP).

Pakistani exhibitors will be looking to source new buyers for a huge range of products including rice, sauces, nuts, frozen foods, sweets, confectionery and tea.

Gulfood will also host the ninth World Cezve / Ibrik Championship, a centuries-old art of brewing coffee in a small, long-handled pot called a Cezve or an Ibrik.

Coffee trading is high on Gulfood’s agenda with Euromonitor International predicting the UAE’s coffee market alone will grow by over 30% in the next four years as Dubai emerges as an important part of the global supply chain.

Buying delegations from the world’s largest traditional importers – the United States and Japan – will network with specialist coffee trading, roasting and packaging companies from emerging markets across the MENA region, South Asia and Africa.

Halal is another huge Gulfood 2016 focus and more than 800 Halal certified companies are exhibiting within the Halal World Food show-in-a-show, while the revamped Gulfood Conference programme will include the Gulfood Halal Forum among other dedicated vertical sessions being held until Wednesday.

The conference programme also includes the F&B Business Forum, which debuts on Sunday and features The Innovation Hub sponsored by British Airways and Avios.

This will see selected entrepreneurs pitch game-changing business ideas to an expert judging panel in a bid to walk away with start-up investment capital.

“The Innovation Hub is a springboard for budding entrepreneurs to elevate their businesses – active or nascent – to the next level,” said Melanie Mingas, group editor of conference producer, BNC Publishing.

The show-floor culinary demonstrations will peak at the annual Emirates Culinary Guild International Salon Culinaire – a showcase of the region’s best culinary talent and expertise.

This year’s Salon will see more than 1,300 professional chefs evaluated by a panel of 25 renowned experts, mandated by the World Association of Chefs Societies (WACS) to judge culinary events across the globe.

In addition, the seventh Gulfood Awards will recognise best-in-class excellence of individuals and companies behind the region’s leadership and innovation in the food and drink industry.

Gulfood 2016 is expected to  draw a record trade attendance of more than 85,000 visitors from over 170 countries including international heads of state, ministers, government officials and national trade associations from five continent.