Hilton Worldwide has unveiled a new motor racing room at Hilton Abu Dhabi inspired by McLaren-Honda racing drivers Jenson Button and Fernando Alonso the themed room has been unveiled to coincide with the Abu Dhabi Grand Prix taking from November 27- 29 and will be available from November 13 to December 6 for the public, as well as Hilton HHonors members. 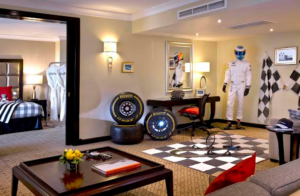 To celebrate 10 successful years as a proud partner of the McLaren-Honda Formula 1 team, Hilton have created the racing inspired room in line with the race season finale of the Abu Dhabi Grand Prix.

A mini scalextric set has even been assembled to keep superfans young and old entertained during their stay, while the entire room has been kitted out with race branding throughout, from a model car to cushions.

Speaking on the design process, British race ace Jenson Button said: “Fernando and I have helped transform the Executive Suite to create the dream room for McLaren-Honda fans packed with our coolest gadgets, official racing equipment and iconic images from McLaren’s history. Fans will have to be quick off the grid to book the suite for a chance to enjoy the experience ahead of the Abu Dhabi Grand Prix.”

Aligi Gardenghi, vice president, marketing, Europe, Middle East & Africa, Hilton Worldwide said: “The UAE boasts a huge grand prix fan base, and we are thrilled to mark the 10th anniversary of Hilton’s partnership with McLaren-Honda, and the last race of the season, in Abu Dhabi with the exclusive racing suite inspired by the racing legends themselves. We’re confident racing superfans, including our Hilton HHonors members, will race to book a stay! At Hilton we recognise that people around the world are not taking enough time off to play. So whether it is the Grand Prix in Abu Dhabi, The European Tour’s finale, The Race To Dubai, or concerts around the world, Hilton inspires travellers to play, to break out of their daily lives, to seek out the unfamiliar or to follow their passion.”