JLT Dining, backed by sps:affinity, has launched the first ever JLT Restaurant Awards for F&B outlets located in the Jumeirah Lakes Towers area of Dubai. 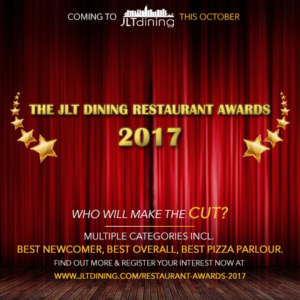 There are more than 200 independent restaurants, bars and cafes in JLT, including Sheikh & Shake, Under500 and McGettigan’s, and they have until 30 September to register online to be considered for an award.

Martin Kubler, CEO of sps:affinity, said: “JLT Dining is all about real food and culinary discoveries. We launched JLT Dining and now the JLT Restaurant Awards to make it easier for Dubai’s foodies to discover the culinary treasures hidden between the over 70 skyscrapers around the Almas Tower.

“We also want to support the local food scene and its doers and makers, mostly SMEs and family-run companies, who often struggle to make their voices heard in a city filled to the brim with restaurants.”

The awards also feature a Best Overall category, to be judged by an expert panel of industry judges.

JLT Dining will announce the top three restaurants in each category at the start of November, and the winners will be unveiled at an awards ceremony at the end of November.

To find out more, go to: https://www.jltdining.com/restaurant-awards-2017