Kai Schukowski has been promoted from hotel manager at the Kempinski Hotel, Ajman to become the youngest ever general manager at a Kempinski property. 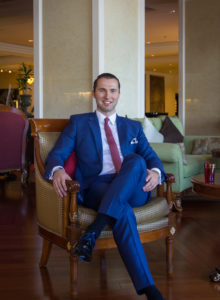 In his new role, Schukowski will continue overseeing the entire hotel operations in line with the owner’s expectations at Kempinski Hotel Ajman while upholding and delivering a high level of European luxury standards.

Commenting on the well-deserved step, Schukowski said: “I am absolutely thrilled about the new challenges ahead and I am very confident that with our passionate, young, driven team, we will continue to rejuvenate the hotel and build on the success of 2015. Also, I am deeply grateful to Kempinski and our owners for giving me such a unique opportunity to prove myself and lead a five-star hotel at such young age, which motivates me even more to prove them right.”

The German national joined Kempinski’s head office in Geneva, Switzerland in 2009, where he was involved in the strategic planning of the brand and reported directly to the company’s COO.

During his two years, he was given the opportunity to become the regional operations manager in charge of all Kempinski hotels in China.

In the summer of 2013 at the young age of 26, Schukowski was appointed as hotel manager at Kempinski Hotel Ajman, the first Kempinski property in the region of India, the Middle East and Africa. In November 2014, Schukowski took on the responsibility of acting general manager due to the resignation of the regional president who was the general manager for 17 years.