Nakheel and Starwood Hotels and Resorts Worldwide, Inc. have signed a management 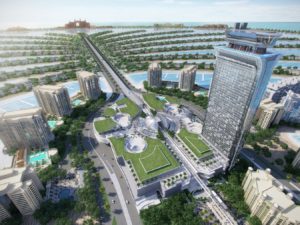 agreement to operate a new St. Regis in Dubai. Set to open in 2018, The St. Regis Dubai, The Palm will be a part of Palm Tower, Nakheel’s 52-storey luxury mixed-use development offering 289 guest rooms, including 23 suites, occupying the first 18 floors of The Palm Tower, while the upper floors will comprise 504 luxury apartments.

The hotel will feature two swimming pools, including the one of the world’s highest infinity pools. Located on the 50th floor, some 210 metres above ground, the pool will border all four sides of the building, offering 360 degree, panoramic views of Palm Jumeirah, Arabian Gulf and Dubai skyline.

The hotel will offer various dining experiences including a signature restaurant with sweeping city views located on the 51st level, a St. Regis Beach Club and an all-day restaurant, making it one of the most desirable addresses on The Palm. The hotel will also feature a public rooftop viewing deck on the 52nd floor. Located adjacent to the luxury Nakheel Mall and Al Ittihad Park, the hotel will also offer beach access to guests.

Commenting on the new announcement,  Ali Rashid Lootah, Nakheel Chairman said: “Palm Jumeirah is a global destination offering the ultimate in luxury living and leisure. Our partnership with Starwood to open a St. Regis on the Palm reinforces what the island is all about: unrivalled, world-class facilities that set new standards for residents and tourists. The Palm Tower will be the jewel in the crown of this world-famous island and a new architectural wonder for Dubai. We are delighted to have partnered with St Regis – another name synonymous with luxury – to represent our flagship hotel, and one of the most sought-after establishments in the region.”

Also commenting on the signing, Neil George, senior vice president, acquisitions and development, Starwood Hotels and Resorts Middle East and Africa, said: “We are pleased to be entering into this partnership with Nakheel for this iconic development which will further consolidate Starwood’s strong growth momentum in Dubai, where we continue to see strong demand for high-end hotel accommodations. The continued growth of the St. Regis brand in the UAE underpins our commitment to Starwood’s luxury portfolio in this dynamic market.

One of 10 new hospitality projects underway by Nakheel, St. Regis is the latest in a growing list of world-famous luxury hotel brands on Palm Jumeirah, which also includes Starwood’s W Dubai – The Palm.

The Palm Tower, for which Nakheel awarded a construction contract for AED819 million in October this year, will be directly linked to Nakheel Mall, a new, 4.4 million square foot retail and entertainment destination by Nakheel. The mall will have 350 shops offering everything from everyday conveniences to the best in luxury goods, with key tenants including British upscale supermarket Waitrose and a 15-screen Vox cinema. Nakheel Mall, where 60 per cent of retail space is booked, will also feature 12 fine dining restaurants on its roof terrace, as well as a medical centre and fitness complex. Construction is ongoing, with completion due in 2018.