Courtyard by Marriott Dubai Green Community has hired Artyom Hakobyan as the new chef of Cucina, the hotel’s Italian eatery. 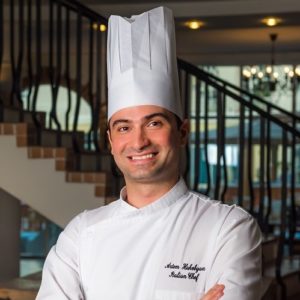 Originally from Armenia, Hakobyan joins the Marriott family with seven years’ experience and a love of molecular gastronomy.

With a degree in Culinary Arts, Hakobyan began his career as a chef in the army and later worked at Mama Mia Pizzeria in Yerevan, Armenia and then Ankyun in the same city.

He relocated to Abu Dhabi to join Italian restaurant, Porto Bello, at the Grand Millennium Al Wahda as demi chef de partie and during his five years at the property, was responsible for pasta and risotto dishes, along with being a reliever of the pizzaiolo chef.

Chef Artyom was then given the opportunity to join Mazina at The Address Dubai Marina as chef de partie specialty where he worked for almost two years.

Over that period, he was responsible for curating the menu, which included pizzas, pastas, raviolis and other Italian delicacies. He also acted as the reliever for the chef in charge of the steak section.

In his new role at Courtyard by Marriott Green Community, Chef will oversee the daily operations of Cucina, the hotel’s Italian restaurant.

He will also play a key role in a new concept catering to leisurely weekend dining launching on 22 September 2017 at Cucina.