by Patrick Ryan
in Catering, Suppliers
A A

Emirates Culinary Guild has set a new Guinness World Record for the most hot tea in one cup.

Members of the guild teamed up with Global Village and Mindset to set the new record of 5000 litres in one cup  – breaking the previous record of 4o50 litres which had been set last year in China.

“We had prepared extra ingredients and when we saw during the morning that all went well, we decided to increase to 5000 litres,” said Chef Uwe Micheel, president of the Emirate Culinary Guild and director of kitchens – Radisson Blu Hotel Dubai Deira Creek.

“For us the preparation for this event actually started in November 2017 with the first discussion with Mindset and Global Village teams. Keeping in mind that Karak Chai has a lot of milk we needed to make sure we follow very strictly the  Dubai Municipality Food Safety Rules. At the beginning of January 2018 we started to work then on the first recipe to be used.”

The karak chai tea was prepared in batches of 10 litres.  Chef Uwe explained that it was paramount that the tea was boiled with the spices long enough to get the flavour right.

Kevin Southam from Guinness arrived on the scene and declared that the 5000 litres of karak chai at 80oC in one big pot, of 3.66 meters in height and 1.42 in diameter, was a new world record.

The Tea was then offered and consumed by 45000 Global Village visitors. 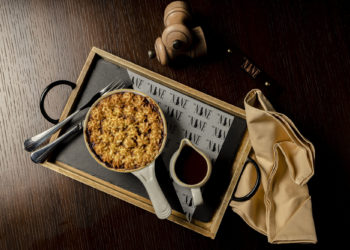