Celebrating 10 years of holding three Michelin stars at La Pergola in Rome, chef Heinz Beck caught up with Catering News on a recent visit to Dubai to discuss his trade secrets 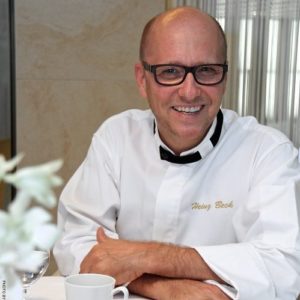 Asked how he has managed to hold on to three Michelin stars at his flagship restaurant, La Pergola, Rome, for the 10th year, Heinz Beck simply answers, “I don’t know!”

German-born chef Heinz Beck first joined La Pergola in Rome in 1994 having never been to Italy, and with no knowledge of the Italian language. However, trained under renowned three-Michelin-starred chef Heinz Winkler, Beck knew what he wanted to achieve from day one. A man of few words, Beck’s actions perhaps offer the clearest explanation for the success of La Pergola. Despite having eight outlets across Europe and Asia to look after – including two in Dubai – last year Beck missed just three services at his Rome restaurant.

“When I’m in Rome, I’m cooking with the boys every day. The day is divided into two parts: admin and cooking. For me, cooking is the best part of the day.”  And while Beck is known as a proponent of modern, experimental cuisine, listening to what his guests want is key, which may explain why around 50% of La Pergola diners are regulars. “I try to make people happy; that’s my secret. I cook for the guests and not for me.”

“When I’m in Rome, I’m cooking with the boys every day. The day is divided into two parts: admin and cooking. For me, cooking is the best part of the day”

And while a remarkably hands-on approach is one of Beck’s defining trademarks, another is his relentless innovation. Since 2000, he has been collaborating with doctors, scientists and other specialists at the Botanical University in Florence and the University-Gemelli Polyclinic hospital of Rome to understand metabolism so that he can create more easily digestible dishes. “I’m not a doctor; I’m a cook,” says Beck. “I don’t want to be a professor because I wouldn’t be able to do it, but I use these collaborations to develop myself.”

One of Beck’s creations is a low-fat parmesan risotto, made entirely without butter and solid cheese. “If you know how to make a beautiful risotto, you don’t need butter to make it creamy,” he explains. “The butter is too heavy and you will not digest it for hours.”

Beck combines water and parmesan in a vacuum-packed bag and cooks it on a low heat to infuse the water with the parmesan flavours and amino acids. “The way I cook my parmesan risotto means you have all the flavour with half the calories.”

For the past two years, he has been working with a professor at the Botanical University in Florence on new dishes using halophyte, a plant that grows in waters of high salinity, but his secret recipes are under wraps for now.

“I’m not a doctor; I’m a cook… I don’t want to be a professor because I wouldn’t be able to do it, but I use these collaborations to develop myself”

What Beck can say for sure, is that the more he learns, the more he enjoys cooking: “Before, I didn’t know so much about cooking but knowledge makes it more beautiful, more challenging, and much more interesting.”

In addition to continually building his knowledge, Beck – who was integral in the development of the De Cecco line of sauces – is working on a retail element to enhance the offer at his Dubai restaurants, Taste of Italy and Social by Heinz Beck. “We are developing day by day; there’s always something new to do. I have made several new dishes and we’re coming up with new ideas for selling products so there’s lots of new things coming up.”