South Africa to Dubai via Asia

Wakame, a new Asian inspired restaurant and bar concept, opened last month within the Sofitel Downtown Dubai, and Catering News ME was the first through the doors to check out the décor of this contemporary yet evocatively inviting space.

Wakame is a luxurious, upscale yet casual, restaurant with a relaxed environment, anchored around its sushi and dim sum counters, which immediately catch the eye upon entering. Imaginations wander towards the Far East as you watch the chefs at work with the freshest authentic produce, using traditional techniques and ingredients reflecting the best of Asia. 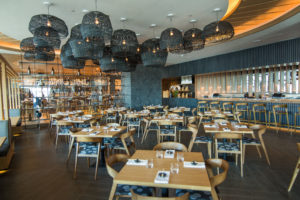 The venue’s atmosphere is further enlivened with a dedicated bar area, offering an exuberant selection of beverages, each of which yields its own unique story, and a resident DJ who sets the mood for afterhours socialising.

The woman responsible for this taste of Asia was Samantha Muhlbauer, from South African-based Samantha Muhlbauer Interior Design, and we were able to catch her adding the final touches to Wakame, before jetting out of Dubai for a fresh new challenge.

Based in Johannesburg, Samantha specialises in the design of restaurants and private safari lodges, and she says Wakame, which was her first project in Dubai, was both challenging and very exciting. Having worked for the owners of Wakame for many years, across South Africa, she says: “There is a lot of trust in what I can provide, which gives me a little free reign to indulge my passions. “I like to create cocooned, welcoming and warming environments, which I have achieved here through the choice of the timbers that wrap the walls to ceiling. I describe this design as minimalist with character and touches of antique furniture. I love to play old antiquities with modern sleek furnishings. A little silly and not too serious.”

Having done several similar projects, Samantha is very comfortable with Asian design. She adds: “I have always had a passion for Asian design, mixed with elements of Scandinavian. I love to mix the modern with the old fashioned. But my absolute passion is for lighting, as it immediately sets the tone for a place – it’s my first priority.

“A lot of the design here started off with links to the shops I designed in South Africa, lending elements and pieces of design.

“There is an overriding theme of fish running throughout the restaurant, not as a logo but symbolism. The central dining area lighting resembles upturned fishing baskets, while the gold and brass chandeliers, which were replicated from Koi restaurant in Cape Town, look like driftwood underwater. There is a huge fish mural on the wall as you enter the restaurant, and the walls are textured with fish scales. Even the dining chairs are fabricated in a printed fabric, designed in South Africa to resemble a sea urchin.”

The aquatic theme is extended throughout the restaurant and the bar, including the outlet’s lucky mascot – a wooden fish sculpture that takes centre stage on the bar. As Samantha explains: “On my first trip to Dubai, I was taken on a tour of the city and we came across a house with these amazing organic wooden sculptures outside. It turned out the man inside was a collector of old wood and I immediately spotted the wooden fish, which now sits on the bar. Before any design was thought about I knew we had to have it.”

Explaining how important unique design concepts are to her, Samantha was at pains to stress the need for the restaurant to stand entirely independent from the hotel, sharing no design element with its host. She says: “It was a deliberate decision to make the design entirely different from its surroundings, so that hotel guests can walk into an entirely new experience.

“We are aiming for a full experience from a guest’s entry, through their dining experience, until the moment they leave. That means a warm welcome, comfortable seating and great food – it’s all encompassing. We want guests to leave feeling as though they have made friends with the waiter.”

Much of the restaurant’s furniture was sourced from South Africa, with the chandeliers from Europe, the basket lights from the Netherlands, and the large dining tables tailor-made in Dubai. One of Samantha’s favourite pieces is an antique chest, originally made in China and passed down several family generations, but eventually sourced in South Africa and carefully shipped to Dubai.

“When all the stock arrived and was cleared through customs and delivered it was like Christmas morning.

“We carefully did the maths and for many pieces it worked out cheaper to have them made in South Africa and pay the shipping, rather than made locally. It was close, but then I had the contacts in South Africa too. It was challenging logistically, but we successfully got everything here on time and with only one chair damaged.”

In fact, the chairs were a signature design feature of stores designed in South Africa for the same group, so it was important to maintain that uniformity. Overall, the entire design took around six to seven months from conceptualisation to delivery.

“Also, in the main dining room we had to adapt the existing extraction units, which had once sat above a teriyaki station. We couldn’t remove them so we covered them over and used them as basis for a cluster of lights. Aside from a reorganisation there were very new elements we had to install.”

The main additions to the kitchen utilities are the sushi and dim sum counters, newly installed in the main dining area. Previously the kitchen was one used across two restaurants – Japanese and Lebanese – so a portion had to be separated off so the two now run entirely separately, and head chef Lloyd Roberts and executive chef and partner Deon Berg were tasked with redesigning the kitchen’s flow.

The Team
With experience of working in London, France, Greece and South Africa, Deon Berg has been with the group for many years, as an original partner. Whereas, Jamaican born Lloyd joined the Dubai team fresh. Lloyd has worked in New York and London, for the likes of Jean George, Nobu, Novikof and Zuma. “We were happy he wasn’t from Dubai, with the preconceptions many chefs here have,” explains Wakame LLC partner Greg Slotar.

Greg adds: “We have six restaurants in South Africa, and Koi is very similar in look and feel to Wakame, with its contemporary and clean design.

“In fact, the name Wakame, which means Seaweed in Japanese, originates from the first restaurant of that name on the seafront in Moulee Point in Cape Town, which we opened in 2002 and commercially decided to close in 2013.”

In launching in Dubai, Greg and his partners Bonnita Bailey, Rory Jossel, Deon Berg teamed up with local partners from the Southern Sun Group. Greg says: “A school friend of mine, who is a partner in the Southern Sun Group, visited Koi a number of times. His group was looking to add F&B to its portfolio and so they asked me to bring Wakame to Dubai.”

Planning for Wakame Dubai began just over a year ago, as Greg explains: “We wanted the same concept but a fresh design, you can’t copy and paste from South Africa to Dubai as it would not fit.

“For one, in Dubai we can create a lot more because we have a far greater variety of food than we do in South Africa. So 50% of the menu is from South Africa and 50% is unique to Dubai.”

Looking to the future, Greg and his partners plan to expand, first in Dubai and then later in Abu Dhabi. Greg adds: “But we are very specific about where we will open, this is not the type of concept to have 20 outlets. Any additional branches may share some themes and concepts but each will be under a different name; there will only ever be one Wakame experience. We don’t believe in copy and paste and we insist on keeping it unique.”