UAE at the Global Chefs Challenge Final in Greece

A chef from The St. Regis Saadiyat Island Resort will represent the UAE at the Global Chefs Challenge Final in Greece
Junior Sous Chef Thamara Kumari from Mediterranean-influenced All Day Dining Outlet, Olea, scooped the regional win at La Cuisine by SIAL. 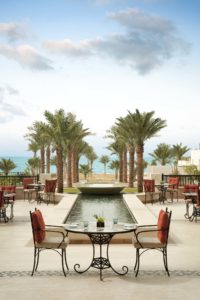 “This is a fantastic win for Thamara and for the hotel, and is a testament to her passion and dedication to competition cookery and to providing an elevated dining experience to our guests. We are excited to see her compete on the world stage in Athens next year at the finals, and representing both the UAE and The St. Regis Saadiyat Island,” said Malcolm Webster, executive chef at the hotel.

The Global Chefs Challenge is where the world’s best chefs meet to compete. The competition is held across the three different categories of Global Chefs, Global Pastry Chefs and Young Chefs Challenge. Competitors must first get through their national selection to go further to the regional semi-final before reaching the world final stage to be held and Worldchefs Congress in Athens 2016.

Chef Kumari previously won Best Cuisine at Gulfood 2015, and will be representing the UAE Culinary Guild in Frankfurt, Germany at the 2016 Culinary Olympics.

Chef Kumari was selected as the UAE contender for the Global Chefs Challenge by the UAE Culinary Guild during the La Cuisine competition held during Abu Dhabi’s SIAL Middle East hospitality trade exhibition earlier this month.
30 Chefs and three bartenders from The St. Regis Saadiyat Island competed in this year’s La Cuisine.

At the 2014 SIAL Culinary Awards, Chef Kumari won the top prize of the competition as Best