Chef Alain Devahive, who worked beside Ferran Adrià at the famous elBulli for a decade is now in Dubai heading up the culinary operation of LaLuz, DIFC. He tells Catering News why Dubai is finally ready for modern Catalan cuisine 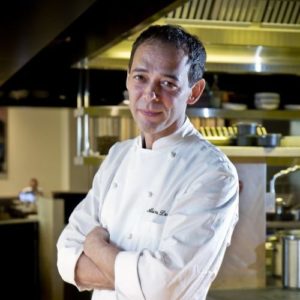 “I’ve tried many of the restaurants here and they are the same; the presentation is the same. They have one example – Zuma – and they all follow it. This is one of the problems in Dubai,” Alain Devahive, executive chef, LaLuz at Dubai International Financial Centre (DIFC) told Catering News during an interview at the restaurant just weeks after it opened. “It’s an amazing concept; for me (Zuma) gets 10 out of 10 but you have to open other concepts and styles because people in Dubai want new experiences.”

And this is exactly the aim of Devahive and the team at LaLuz, the first Dubai concept from Barcelona’s Tragaluz Group, founded by mother and son duo, Rosa Maria Esteva and Tomas Tarruella in 1987 with the opening of El Mordisco in Catalonia.

In addition to the new Dubai venue, the company today boasts a portfolio of 14 outlets and a boutique hotel in Barcelona, two restaurants in Madrid, one in Girona, and its first international venture in Mexico. Each venue is an individual concept, and not all are centered around Catalan cuisine, with Japanese, seafood, and tapas restaurants among them.

However, LaLuz is Catalan through and through explains Barcelona-born Devahive. “[LaLuz] is like a modern restaurant in Barcelona. Barcelona is a very modern, creative city. The quality of the food and chefs is amazing now. I’ve tried so many restaurants there and the level is incredible,” he says.

For Devahive, one of the most interesting aspects of Catalan cuisine is its cosmopolitan heritage, given the city’s location as a key trading hub on the Mediterranean Sea. The region has been in the global spotlight as a centre of culinary excellence in recent years, boasting critically-acclaimed restaurants such as Cinc Sentits, El Celler de Can Roca, and of course the famous elBulli, where Devahive worked alongside Ferran Adrià – who he considers the best chef in the world – for 10 years before taking a more behind-the-scenes role at elBullitaller, the restaurant’s food research laboratory.

“The last 20 years have been very important for gastronomy in Catalonia because Ferran Adrià and other chefs have travelled around the world a lot and so we share our influence from Catalonia and Barcelona and now you can find many influences from other countries but the accent is still the traditional family food,” he says.

In Barcelona, there has been a distinct shift away from fine dining restaurants to a more fun, casual, friendly approach according to Devahive, and this is what he aims to recreate at LaLuz. “The food is very important, but in a good ambience because we want to offer not just a food experience, but a global experience with the music, the ambience, the style of service, many things.”

The interiors have been designed by Tarruella Trenchs Studio, which is behind a number of hospitality interiors in Catalonia and internationally. Gold and black hues, stone finishes and geometric shapes create a feeling of laid-back elegance, and the space transitions from a business lunch venue into an evening restaurant and then a night-time lounge, with opening hours stretching until 3am.

In addition to his Barcelona roots, Devahive has been influenced by his Belgian heritage on his father’s side, as well as his learnings from Asia – Devahive opened Catalan restaurant, Catalunya, in Singapore in 2012, and then in Hong Kong the following year.

Having spent six months prior to LaLuz’s opening in Barcelona perfecting the menu, Devahive believes the opening phase will be a period of trial and error as he comes to understand the Dubai palate. However, for Devahive this has been a more challenging process in Dubai than it was in Asia since the emirate is made up of such a wide range of nationalities, with no specific taste defining the population.

“[LaLuz] is like a modern restaurant in Barcelona. Barcelona is a very modern, creative city. The quality of the food and chefs is amazing now. I’ve tried so many restaurants there and the level is incredible”

“When we opened in Asia we modified more than in Dubai because in Asia they don’t like things too salty or strong in flavour. But in Dubai you have many people from many countries so it’s difficult to fix one style of taste,” he comments. “We have to spend time here to see the city and get a feel for the guests. Usually we will change it a bit once we’re here in Dubai so we’ve brought some dishes from Barcelona but we’ll change the presentation and flavours a bit.”

Another challenge Devahive has faced in adapting his Barcelona-created menu to Dubai has been sourcing the correct ingredients for the dishes.  “In Spain we have many products and ingredients and the quality is very nice. The challenge here is to find the products so now we are working with 14 – 16 countries to bring products. The first thing we did in Dubai was work with suppliers to bring the products we needed to fix the menu. We created many dishes in Barcelona but sometimes you create dishes in other countries and it’s very difficult to translate them here because the ingredients aren’t the same.”

Since LaLuz is the first modern Spanish restaurant in Dubai, educating diners on Catalan cuisine is another challenge Devahive is tasked with. And so rather than focusing on molecular dishes – the gastronomic movement elBulli was known for – his learnings from the Girona restaurant will be represented in subtle ways.

“Asian, Japanese, French, Italian is all very traditional and everyone has a lot of knowledge of this, but not Spanish; we must do it step by step. First we’ll do the traditional Spanish omelet and then the second step would be making the modern Spanish omelet,” says Devahive, explaining that this would involve the same flavours, but a format that is totally unrecognisable – served in a martini glass and with three separate layers of onion confit, egg yolk, and potato foam.

While deciphering the consumer palate has been more of a challenge in Dubai than it was in Asia, finding good staff has been much easier, says Devahive, who brought over some of his most trusted cooks from his previous role in Hong Kong.  Currently there are around 70 staff working in the restaurant, 28 of which are in the kitchen, and Devahive believes the team is at capacity. “I’m very happy with the staff in Dubai because they come from many countries and I’m happy with the level of knowledge of the cooks. In Asia it’s more difficult because of the visas and you can’t bring people in from Europe because they have quotas.”

Procuring the alcohol license – and a wine list 70% made up of Spanish bottles – was no major challenge for the team either, given the venue’s DIFC location. However, one thing Devahive was not prepared for was the Dubai summer, with the restaurant having opened in May just before the start of Ramadan. “Summer is very slow,” comments Devahive. “I’ve worked in many places around the world and I’ve never seen anything like this; it’s very surprising for me.”

However, now with the end of the hottest season within sight, Devahive is looking forward to opening up the venue’s terrace, changing the menu and introducing a new brunch. “Summer is slow but it’s good because we can work on new plans. We want to start brunch and we would do it the Spanish way. The concept will be to change the regular feel of the menu and make new special dishes for brunch. It will be a show brunch, an elegant party brunch. “We will change the menu at the end of September but only 40% because the other 60% is good and we want to have the regular plates because people like them. We will change the most creative dishes every three to four months; we can bring new products from Europe.”

So far the restaurant has been very well received by Dubai diners according to Devahive, and he has high hopes that once fully up and running, it will be one of Dubai’s major F&B success stories. Asked if he believes LaLuz could achieve the same recognition among Dubai diners as the likes of La Petite Maison and Zuma, he says: “Yes, we can, but it’s not a competition. We can live in the same location because one is Spanish, the other is Asian and the other is French. We have a very good relationship with these restaurants. Guests really like the experience of the food in this restaurant because it’s new for most people.

“It’s Spanish, and they don’t have Spanish restaurants in Dubai, not modern Spanish. I think this is one thing Dubai needs – it needs more concepts because there are people from all over and they travel a lot and they see other restaurants in other cities and they want to have them here in Dubai.”