by Dina Maaty
in Catering, F&B
A A

A ‘Blind Barista Battle’, sponsored by Milklab, is being held at The Sum of Us Coffee Roastery in Burj al Salam Trade Centre on Sunday 5 March starting from 9am. 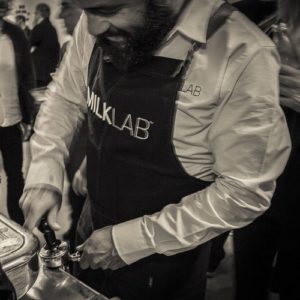 Milklab is an Australian-made range of milks designed for specialty coffee.

The brand is now available in Dubai and to celebrate its expansion, Milklab has sponsored the ‘Blind Barista Battle’, during which the country’s best baristas are competing head to head in a latte art competition.

Freedom Foods GM commercial and maker of Milklab, Peter Brown said:  “A coffee issue that has plagued hipsters and baristas the world over is how to make a latte without having the milk split and curdle due to the high acidity of black coffee and temperature.

“Milklab was born from the realisation that the best coffee needs a better milk, and is designed to texture and stretch to work with espresso coffee.”

The ‘Blind Barista Battle’ event is being supported by the Victorian Government Business Office (VGBO) in Dubai.

Victorian Government Commissioner to the Middle East, Africa and Turkey, John Butler stated:  “We are pleased to be supporting such a fun and unique event like this in Dubai, particularly as the product comes from Victoria.

“The UAE, and the wider Middle East, is one of Victoria’s largest food and beverage export markets. Promoting new and innovative initiatives like this helps to underpin Victoria’s position as a provider of high quality products to the region.”

The competition features 30 baristas who are challenged to produce latte art patterns using various dairy and non-dairy milk types in the knockout-style event.

Cash prizes and products will be awarded to first, second and third place, as judged on skill, presentation and taste of the baristas’ Milklab latte creations.

The event coincides with the launch of The Sum of Us’ own range of ‘Encounter’ coffee beans, which are roasted in house and will be used by baristas during the competition.