Smoothie King has debuted in the Middle East, with the opening of its first outlet in Dubai’s BurJuman mall in September. 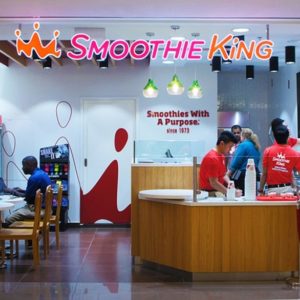 The outlet is the first of 45 branches expected to be launched in the GCC over the next five years by Al Ghurair Retail, part of Al Ghurair, following the signing of a development agreement with the international smoothie brand.

Laurent Cabioch, GM, Al Ghurair Retail said: “With the demand for healthy food and beverage options on the rise in the UAE and across the region, our foray into this sector through this partnership with Smoothie King couldn’t have been timed better.

“People are increasingly becoming more health conscious and are proactively seeking out healthier and active lifestyle options. Smoothie King is the industry’s first and original nutritional fruit and function-based brand offering fresh blended smoothies and we definitely see potential for growth and expansion.”

The products can be customized with a selection of enhancers for weight management, energy, fitness and wellness, as well as supplements.

Smoothie King’s owner and CEO, Wan Kim added: “With a product offering that is fully customisable and includes a wide variety of nutritional smoothies, Smoothie King’s value proposition has been unmatched for nearly half a century.

“With our focus shifting to international markets growth, expansion in the Middle East is an important step forward in our ambitious growth plans of opening more than 1,000 new franchises worldwide by the end of 2017. The UAE is the perfect launch pad for a brand such as ours as we draw up plans with Al Ghurair Retail to expand Smoothie King’s presence in the country and launch across the GCC in the coming years.”

Dubai-based Al Ghurair Retail franchises and has brand associations with a number of concepts in the Middle East, including Springfield, Morgan De Toi and THEFACESHOP.

The company is in the midst of an expansion programme which will see its regional footprint increase by more than 50%, with the current 60-plus stores in the UAE, Qatar and Kuwait increasing to almost 100.

Al Ghurair Retail is part of Al Ghurair, one of the largest diversified industrial enterprises in the Middle East, with a core focus on food, construction, resources and property.

Its Food operations include flour mills in Dubai, Lebanon, Sudan, Algeria and Sri Lanka; and the group opened the first mall in the Middle East, Al Ghurair Centre, in 1982.

Smoothie King was founded in 1973 by Steve Kuhnau, whose mission was to help others achieve better health in a tasty way.

In 1989, Smoothie King became the first franchised smoothie bar/health food store in the U.S. and currently operates in 33 states, the Caymans, the Republic of Korea and now Dubai.