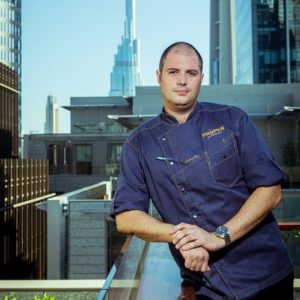 Previously executive pastry chef at Hotel Café Royal in London – once one of the city’s most iconic venues – Blas was responsible for the patisserie in The Café, the Ten Room restaurant, the Oscar Wilde Bar and The Domino Room, the hotel’s flagship restaurant.

As executive chef of Capital Club Dubai, Blas will work under head chef Enrico Paiola to develop the team and create a new menu.

He commented: “It’s an honour to be working with the team at Capital Club to refresh their menus and recipes. Members are going to experience a new level of quality as we aim to deliver an outstanding culinary experience.”

Having begun his career in the UK at the Samling Hotel, which has a Michelin-starred restaurant, he later worked under chef Raymond Blanc and Benoit Blin at two-Michelin-starred Belmond Le Manoir aux Quat’Saisons in Oxford, UK.

The new dishes in Capital Club’s Member’s Bar will reflect traditional gentleman’s club menus, with items such as steak and mushroom pie with sweet glazed baby onions and Eton Mess.

In Capital Club’s fine dining restaurant, alternative Mediterranean dishes will be on offer, such as Bavette steak with garlic and parsley, heirloom tomatoes with fresh burrata and traditional lemon tart.

Ian Palmer, general manager, Capital Club Dubai, said: “Having worked with Andrew Blas and experienced his incredible creations at Hotel Café Royal, I am so thrilled that he is part of the team and will be able to implement his magic in the kitchen for our members.”

Blas received an Academy Award of Excellence at the Academy of Culinary Arts London and received silver medals for chocolate sculpting at the UK’s largest foodservice and hospitality event, Hotelympia.

He was also the captain of the UK Pastry World Cup team.