Millennium & Copthorne expands in Saudi Arabia by signing over 2,500 keys

Millenium & Copthorne Hotels, Middle East and Africa continues its expansion into Saudi Arabia by announcing the signing of four hotels in Madinah, including two Millennium hotels as well as a Studio M and Millennium Executive Apartments, the Group’s budget and serviced apartment brands.

The four new hotels are part of the masterplan of Knowledge Economic City, an impressive $7bn development in Madinah. They are envisioned to open by 2020 and will range in size from 600 to 1,000 rooms per property.

The Group’s presence in Madinah will address the demand for quality internationally branded and long-stay options in the city, especially during the religious periods of Hajj and Umrah. In addition, the business and conference segments are expected to encounter growth in the coming years with the completion of Knowledge Economic City.

The move follows the signing of four hotels in Madinah and Riyadh earlier this year and is part of Millennium & Copthorne’s strategy to open over 20 hotels in the Kingdom within the next five years and 100 hotels across the Middle East by 2020.

Ali Hamad Lakhraim Alzaabi, President & CEO, Millennium & Copthorne Hotels MEA says: “This agreement is another significant achievement supporting our rapid expansion in Saudi Arabia, a key strategic focus country for our Group. The hospitality industry in the Holy City of Madinah is witnessing remarkable growth due to a rise in religious tourism as well as the thriving economy. There is currently an undersupply of branded hotels with international standards and we are confident that our expansion plans will help address this.” 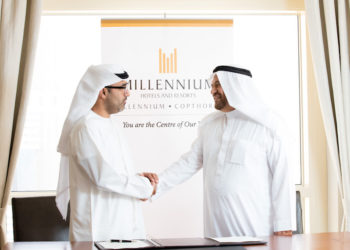 Dr. Marwan Fahmie, Acting CEO, Knowledge Economic City Co. says: “Knowledge Economic City is set to serve Saudi Arabia’s economic diversification strategy and cement Madinah’s role as an Islamic cultural centre. By working closely alongside our consultants Colliers International and an international leader in the hospitality industry such as Millennium & Copthorne, we are confident that visitors and residents alike will be provided with an exceptional service offer.”