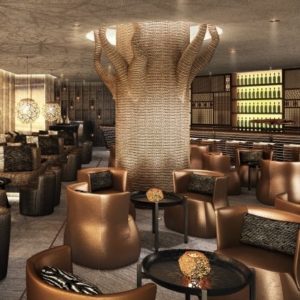 Please describe the concept of the venue in your words?

Aseelah aims to proudly share with visitors and locals alike the traditional, rich Emirati culture that continues to live on today. In essence, Aseelah’s identity can be summarised in three words: history, heritage and hospitality.

What are the signature items on the menu?

What is interesting about the beverage offer?

The beverage offer will consist of an extensive mocktail menu featuring some specialty Emirati drinks such as Aseelah falooda, Ayran and Burj Al Emarat all prepared with local products. There is also a specialty Aseelah tea blend exclusively made for the restaurant as well as a traditional Emirati coffee blend consisting of cardamom and saffron.

Who designed the interiors and how do they reflect the concept?

LWdesign group designed the interiors. On entering, a group of pendants spanning across the walls are reminiscent of an alley in Dubai’s famous historic district, Bastakiya. Spice trays have been reinterpreted to create a refined shelving display suspended above the seating. The use of raw wooden features combined with nautical ropes reflects desert trees and the proximity to Dubai Creek, where it all began. The combination of old-fashioned local material elements depicted in a modern way perfectly mirrors the concept of Dubai’s past and present.

How will the venue compete on the Dubai marketplace?

The concept of Emirati cuisine is relatively niche on the Dubai food and drink scene and so we can be really targeted with our strategy. Being situated in the heart of historic Dubai, in Dubai’s first five-star hotel, history, heritage and traditional hospitality runs through the core of Aseelah’s origins and surroundings. These elements should give Aseelah a competitive advantage.