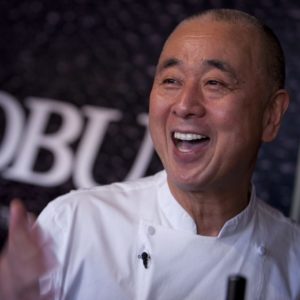 On 26 – 27 November from 7pm, guests will enjoy a Japanese and Peruvian influenced tasting menu inspired by chef Matsuhisa’s favourite dishes, with celebrations to continue at an after party on the terrace from 10pm.

Guests will then move onto Japanese beef tenderloin with wasabi salsa and ponzu sauce, and a dessert of tofu tiramisu and Japanese mochi ice cream.

The tasting menu is priced at AED 650 per person. A drinks package including bubbles and signature Nobu free flowing cocktails is available at the after party from 10pm – 1am and priced at AED 200.

Nobu Dubai opened in 2008 and today there are 33 outlets around the world.