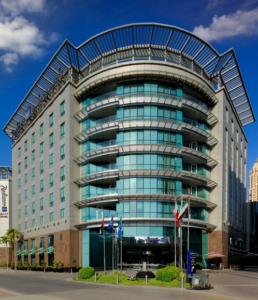 across its hotel rooms, suites and public areas.
The implementation has resulted in improvement in rating of WiFi services and drastic reduction in volume of IT help desk calls.

From guest feedback received via its Medallia guest survey, the hotel took the initiative to upgrade its wireless network systems in terms of performance and coverage.
Commenting on the move, Rushdy Mubarak, IT Manager at Radisson Blu Hotel, DMC said: “It is our group’s policy to offer complimentary WiFi connectivity and with typical business travellers bringing anywhere between one to five wireless devices, we needed a solution that could cope with growing demands over the next five years. We did our due diligence and were guided by Aruba’s local gold partner, EMW who assured us that Aruba would offer the best solution in terms of performance, simplicity, manageability and security,” .

Aruba’s team of network professionals conducted a detailed site survey and determined that while 802.11ac solutions would be required to support high density environments such as meeting rooms and public areas, its 802.11n solutions would be sufficient for coverage in guest rooms. This meant the hotel could meet guests’ demands for a reasonable cost. Aruba’s 275 Outdoor APs were selected for the outdoor areas as they provided impressive wide-area coverage, while Aruba 225 and Aruba 205 APs were chosen for the meeting rooms. To provide the highest level of service, 802.11ac coverage was extended to the suites while the Aruba 103H Hospitality AP was selected for the remaining rooms. To simplify manageability of the new network, two Aruba 7210 mobility controllers and Aruba’s AirWave network management platform were also selected for the deployment.