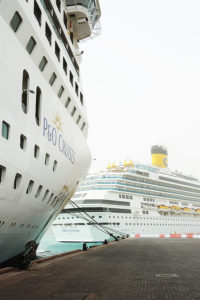 Up to 80,000 cruise ship passengers, arriving via 37 port calls are expected in Sharjah during the 2015 – 6 cruise season, according to data released by Sharjah Commerce and Tourism Development Authority (SCTDA).

Strategically located on Sharjah’s Indian Ocean coast, Khorfakkan Port has been welcoming luxury cruise-liners since the early 1980s and has become increasingly popular on the itineraries of international operators. A new leisure cruise ship terminal is now being built in Khorfakkan to increase the port’s capacity in order to handle more cruise lines and cruise tourism throughout the year.

This season, Sharjah expects to receive cruise liner visits from TUI Cruises, MSC Cruises, Costa Cruises and AIDA Cruises. According to the STDA, passengers visiting the emirate will mostly come from European countries such as Italy, Spain, France, Germany and the United Kingdom.

Sharjah’s tourism development strategy, Tourism Vision 2021, aims to attract more than 10 million tourists to the emirate by year 2021. Sharjah hotels registered one million guests during the first six months of 2015.

In total, GCC countries will receive more than a million visits from cruise passengers during the 2015-2016 cruise season and Sharjah’s cruise business has been growing steadily.